Trains and Boats and Planes... and Amsterdam 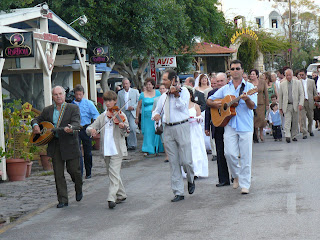 Our last afternoon in Patmos, as I was walking back to our hotel from the internet café (see my last post) I saw lots of people dressed up (it was about 5 pm) at the town square. As I rounded the cor ner I heard music, and then I saw it (see photo)… a wedding procession coming down the main street of Skala! Musicians led, followed by 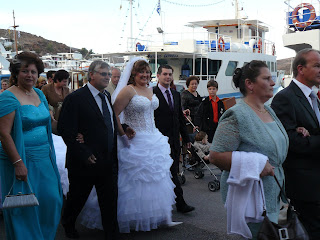 the bride and groom… the bride’s train was being carried by several “train bearers” and there was a crowd of about 50 people. The procession started at the bride’s home, and continued to St. Nicholas Church, where the wedding would be held. (Louka told me this, as I watched the rest of the procession from his café.) The people at the square joined the procession as it went by. This is an aspect of community that has been lost in most places in America, I think. Later, there would be a line of cars honking their horns and following the bride and groom, in a car decorated with FLOWERS, out of town for their honeymoon. Groups of wedding guests gathered back in the town square to continue celebrating. All evening, as we walked the tiny winding streets, we saw people gradually wandering home in their wedding attire. 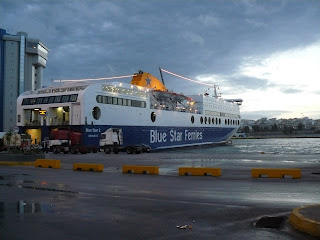 In the midst of this we walked again to the bay on the west side of Patmos to watch another sunset before our final dinner and checking out of our hotel. At midnight we caught this boat (the Blue Star Ferry) to Athens. We had a “deluxe” sleeping cabin on the bow, with comfy beds and the treat of being rocked to sleep by the rolling waves of the Aegean Sea. We were asleep by 1 am and up again at 6 am, just in time for a cappuccino before getting off the boat at Pireus (near Athens)… where we grabbed a taxi for a ride to the airport. There we rented a car for our overnight trip to Arohava, up in the Parnassus Mountains near Delphi. Three hours later we arrived… the only problem was we couldn’t figure out how to put the Saab we rented into reverse (not even Fr Paul, who drives a standard and is quite the car guy!)… so, as we missed our left turn into the hotel, we stopped crosswise on the narrow street against a curb, causing a huge traffic jam in the skinny, winding street. It was raining, and Fr Paul got out of the car to push us backwards, joined by two local men, while a local woman directed the other cars and truck to back up and make room for us to turn around in the middle of the street… it was hilarious. I would have taken pix if I hadn’t been so embarrassed. (Later we figured out the reverse, thank God!) 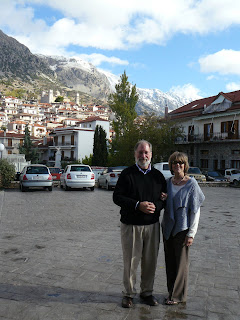 Our hotel, The Santa Marina, was a popular ski resort in the winter… with amazing views … the first snow of the season landed on the peaks during the night. This was just two days after I swam in the ocean in Patmos, but it seemed a season away because of the altitude and temperature drop. After checking in, in the chilly rain, we drove to the Monastery of Ossios Loukas, on a picturesque slope on the western 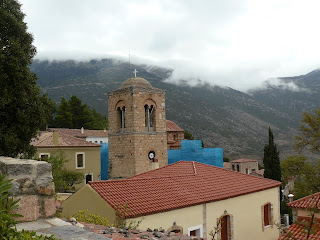 foothills of Mount Helikon, near the ancient town of Steiri.

Several churches in this monastery have well-known icons, like these 11th century Byzantine mosaics of Christ the Pantocrator and the Crucifixion, which are in the narthex of the main church. 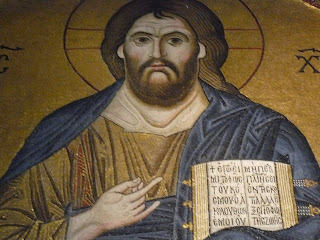 Ossios Loukas secretly followed two monks from Rome to Athens and entered the monastery of Pandanassa when he was only 14. He returned to his family later, and with his mother’s blessing, became an ascetic at Ionnitzi. Later he lived at this monastery where he was visited by thousands of pilgrims seeking help for their hardships, as he had also suffered much. He died in his cell here in 953 A.D. Miracles continue to gush forth from his holy tomb, which we venerated next to the small chapel of St. Barbara, where we attended 6 pm Vespers. The icons on the iconostasis in this 10th century church were stolen by Turks, so the ones in the 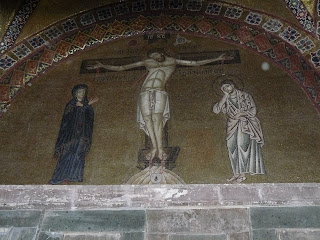 photo are copies, but there are some very old icons in the larger church here.. by the well known Cretan iconographer Michael Damaskines (1570) who instructed El Greco in painting.

Back to our hotel at 7:30 then out for dinner at a local tavern (best lamb Father Basil has ever tasted!) and back to the hotel lounge for 32 flavors of hot chocolate! (Well, we only sampled three of them.) Hot baths, (we were cold and wet) and good night’s sleep under down puffs… waking to first snow on the peaks (behind me and Father Basil in the pix) and sun starting to shine again. Father Basil, Father Paul and Sissy got up early and headed off to Delphi… but I took a “personal morning” to sleep in, shower, and have cappuccinos and posting on my blog. We left around 11 am. 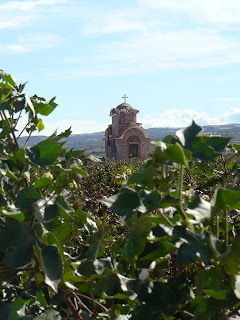 Driving to Athens we went through Thebes… and then COTTON FIELDS (yes, in northern Greece!) with this beautiful, tiny church, which Sissy and I named the Church of the Cotton. Our GPS system wouldn’t work in English, so we got lost a couple of times in small towns, finding various degrees of filoxenia (hospitality, for those who haven’t read my previous posts) from the locals we asked for directions, but finally made our way into the Athens area. We hailed a cab for Fr. Paul and Sissy, who were spending another night in Athens, and Father Basil and I headed for the airport to return the rental car and catch our flight to Amsterdam. I’m in the KLM Lounge at the airport now, finishing up this post. I’ll down load photos in Amsterdam and hopefully post this tomorrow (Wednesday) before we fly home… if I have internet access. Maybe I’ll have time to add a few more photos to previous posts, or figure out a way to link to a larger photo gallery… I’m not really very computer-savvy.

Reflections as we leave Greece? Beauty and holiness 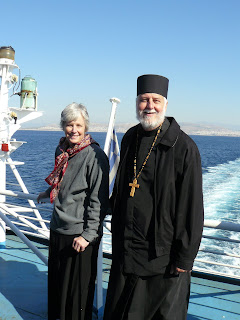 everywhere we went, from the busting city of Athens (five million people) to Aegina to the spiritual haven of Patmos to the lesser known jewel, Leros, and the ski-town of Arohova. Inconveniences are accepted more easily by people here … yes, we Americans are spoiled. I already knew this, but I recognize it even more as we start our trip home, because I’m finding myself looking forward to some of the things that spoil me… even in Memphis. But oh, I am going to miss the “Greek light” and the colors of blue in the Aegean that you don’t see anywhere else. And my dear friends and trip buddies from Mississippi, Father Paul and Sissy Yerger! Good thing they’ve got a grandson in Memphis… and a second grandchild due in November. (Oh, yes, and a daughter and son-in-law:-) So, when we kissed goodbye today, it wasn’t really goodbye…

I hesitate to even write about Amsterdam… it’s cold and cloudy and dreary compared with Greece…. but maybe a fitting transition as we return to Memphis….

We ride a double-decker train from the airport to Amsterdam Centre, then walk a few blocks to our hotel, the De Roode Leeuw, in the famous Red Light District. (No, we didn’t walk down the narrow streets where the world’s oldest profession flourishes… a sad commentary on the blatant disrespect for women here. ) On the streets, the women are mostly slim, in tight jeans and high-heeled boots. The men also mostly slim here, as everyone walks everywhere.

Sitting at breakfast in the glassed-in restaurant at our hotel on Wednesday morning, the street scene looks like a page in a Richard Scary book for children… those books that offer too much stimuli: there’s a lane for walking, but machines that clean the street also ride on this lane. Then the bicycle lane. Then the metro (train) lane, and finally a lane for cars. Then it all repeats on the other side of the street. At 8:15 am this morning all lanes were going at once, and it was still dark outside, with sunset at 8:28 today. Such a contrast with the sleepy, sunny streets in Greece.

A man is begging, and we watch him approach several people, who don’t stop or even look at him, as they rush to work. He would have better luck in Memphis, where the pace is slower. After breakfast we walk outside to check the temperature and he approaches us and explains, very politely, that he is homeless and it costs 7 Euros for the “hostle.” We give him a few coins and he thanks us, again, politely.

We decide it’s too cold to even walk to the boat rides in the canals, and we don’t have enough time for the museums, which open at 10… so we sit with our laptops and coffee at the hotel restaurant and just watch Amsterdam go by outside the window. We’re really in no shape to keep up with these fit people! We’re ready to go home. Back to the south where everything is slower. Our plane leaves in a few hours. My next post will be from Memphis. I'm actually ready to be there now.
Posted by Susan Cushman at 2:47 AM