Wednesday October 17 was our final day in Athens. Lunch at “The Something Else” was fun – our waitress went to the University of Arkansas, then married a Greek and here she is. After lunch, the men took the walking tour of the Acropolis, while Sissy and I opted for a slower pace and a little shopping. Our first discovery was the working studio and gallery of a world-known artist, Takis Moraitis. This pix shows the huge cistern which was discovered in the ruins during renovation of this part of the Plaka, so he just works around it! My favorite piece of his is called “Byzantine Chapel,” but I also liked many of his paintings of doors. (I couldn't make this link work, but you can try if you want to: http://www.gallerymoraitis.gr/. )

My first Starbucks since we left the States did not disappoint. Our final stop was at a fine jeweler for a special gift… then back to the hotel. Our final night in Athens proved to be an adventure… we were walking to a nearby hotel when we stopped at a corner newsstand for post card stamps. Someone decided to ask the lady to recommend a restaurant, so she sent us on a long walk to the Greek House. We were almost there when a taxi driver stopped, got out of his car and offered to take us to a better place, not so touristy… for only 3 Euros, and then a round trip back to our hotel afterwards. He said it was nearby. So we got in and rode for miles and miles… I had visions of the Greek mafia waiting for us in an abandoned warehouse or something. Finally we arrived at the supposed non-touristy spot, and the owner’s business cards were in ENGLISH…. Duh… but the food and service were good and indeed another taxi driver drove us back, and the first trip was “free”… The young man at our hotel desk said we’d been scammed. I said I wondered if the taxi driver was paid by the restaurant owner. You think?

Thursday October 18 offered opportunities to learn the Greek saying, “What can you do?” (I asked how to say this in Greek many times, but I keep forgetting!) Anyway, we board our plane for Leros, only to be told there is NO CREW, so we deplaned and were told it would be an hour and a half delay. What can you do? We got another cappuccino and relaxed, and were happy when the delay was over in thirty minutes. Back on the plane and off to Leros, where we land only a few feet from the bluest water I’ve ever seen. We arrive at our lodging, the Hotel Archontiko Angelous built in 1895… lovely, country manor, but only a short walk to the sea. Coffee is served on the patio by Lucy, our hostess the owner’s mother. The owner, Marianna, and her daughter, Irene, have gone back to Athens for the school year. We are the last guests of the season. 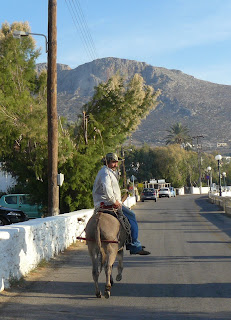 After lunch only a few feet from the water (small fish, shrimp, Mythos beer) I decide to go for a quick swim while the others rest at our hotel. Floating on the salt water, I take in the scooters rounding the curves by the water, the gulls overhead, the cats everywhere on my walk back to the hotel, and even a man on a donkey who turns to pose and smile as he rides away.

At 4:30 we head up a treacherous road to the Monastery of the Holy Angels, to meet Sister Gavrilia, the nun who is starting a new monastic community 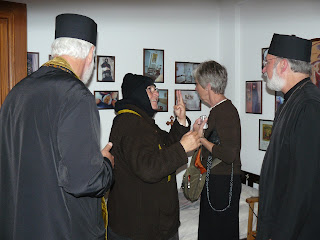 here. She has a special devotion to Mother Gavrilia who has a similar reputation among Orthodox Christians as that of Mother Theresa among the Catholics. Here we saw filoxenia at its maximum, as Sister Gavrilia welcomed us with smiles, tears, joy, hugs, showing us Mother Gavrilia’s bed, other personal items, and shared more of her story with us. She also allowed us to do prayers in the main church as well as in the room where Mother Gavrilia’s things are kept. As we were leaving she gifted us with many icon prints and other special items. We all felt a special love for her.

That evening we walked around the corner from our hotel to a lovely Italian restaurant, Osteria Italiana, owned by two professional musicians, da Giusi e Marcello,who often broke out in song as they came and went from the kitchen. Delicious pizza, pasta, salad, and cream caramel on the outdoor patio. Finishing up around 10:30, we walked back to our hotel and reluctantly said goodnight. 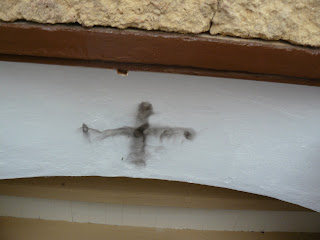 The next morning,… we woke to the sound of jack hammers and men shouting in Greek. The power was out due to local cable work, and there were electrical trucks blocking the road and entrance to our hotel. No worry … we sat and enjoyed breakfast on the patio (best French toast ever, fresh-squeezed orange juice, coffee) and then we were off to the “castle” that housed another monastery… this one containing the original tomb and relics of Mother Gavrilia. But as we were leaving the hotel, Father Paul noticed the smoky cross made above the doorway as a family member brought home his candle from Pascha one year and made the cross with the smoke… and ancient custom here.

The church at the castle contains the icon of the Mother of God attributed to the Apostle Luke in AD 34. Also contemporary wall scenes of the icon being brought to Leros by boat and received by the town and church. On the iconostasis there are three icons painted in the 14th century and one in the 18th century. Zambetta, a lovely Greek woman who works at the church, greeted us and lit incense so we could do prayers by Mother Gavrilia’s tomb and relics. Zambetta, it turns out, once lived in Houston. We kept finding how small our world is. 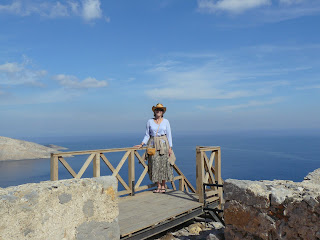 As Niko, our wonderful taxi driver all over Leros for 24 hours, drove us to our boat to Patmos, we all agreed that Leros was the surprise treasure of our trip. We met r 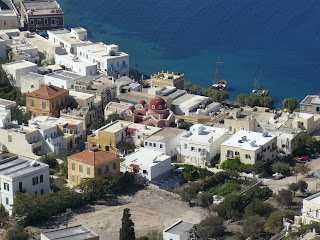 egular visitors there who come back year after year for its unspoiled atmosphere, hospitality, and spiritual treasures. Views from the "castle" were amazing... the water really IS this blue! And the villages and churches below are storybook beautiful.
First day in Patmos...
Our boat pulled into Patmos and we walked from the dock to the Hotel Scala… then back to the 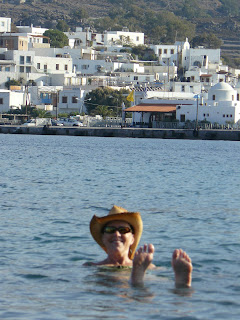 waterfront for lunch at the Ostria Café: fried cheese, cheese pies, and “tomato balls” – yummy! Sissy joined me for a swim (brrrrrr) before resting in our rooms for a bit. Father Basil and I took a walk to the other side of the island (skinny part) to watch the sunset at Hohlaka Bay. On our way back to the hotel we found a tiny church of St. Paisius… we wouldn’t have noticed it, but an elderly woman dressed in black with a black head covering walked past it and crossed herself. Treasure everywhere.

A light supper at a waterfront café owned by Louka Grillis, a Greek man who lived for many years in Jackson, Mississippi (co-owner of the Mayflower Café there, for those who know the place) and a short walk back to our hotel finished off our first day in Patmos. Slow. Relaxing. Preparing for a big weekend of services at the Monasteries…. Sunday is the feast day of St. Christodoulos, who founded the monastery of St. John the Evangelist. More about them later! (I'm at an internet cafe in Patmos now, having spent the day up at the main monastery, but will write about it another day....)
Posted by Susan Cushman at 7:36 AM

HI!!!!!!!!!
This is Nikol,assistant at Moraitis Gallery!
I saw by chance the photo from the painter's studio!
It is a great pleasure that you appreciate Takis' work and the fact that we are a part of your holiday memories!

Oh!I would also like to inform you that our website is under construction but it will be available very soon!I will let you know!
Till then you can contact us -->
E-mail: panmoraitis@internet.gr

The most traditional hotel in leros greece.ANGELIKA
web site www.leros-angelika.com

Gr. Gavrilia is very special to me. She introduced myself to me after a visit to St. Gregory Palamas Monastery in Ohio, where they think a lot of her. Her book Ascetic of Love was one of my few bookly companions in the Atlanta FPC, and through it, I received a call on page 32, 32 to Cameroon, on Oct 11, the feastday of St. Philip the Deacon, my name saint.

I stumbled upon your blog, trying to search for Nun Gavrilia. Would you happen to have a link to the monastery or how to get in touch with her. I know this is a long shot. It's in regards to her book and her knowing of Fr. Lazarus Moore. you can email me, Rachel, at archlazarusmoore@gmail.com