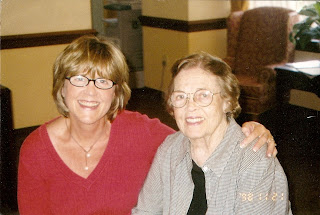 C. S. Lewis wrote A Grief Observed after his wife, Joy, died of cancer. I first read this book in 1998 after my father’s death (also cancer) and I shared the book with my mother. She didn’t like it. I asked why. She said, “It’s just too hard to read.” She prefers to continue to live as though my father is still with her. Every morning, as she looks at his picture in her room, she says, "This is the day the Lord has made," and then she says the response, as though they are still sharing their traditional morning greeting, "let us rejoice and be glad in it." They were married 49 years. After my father died, my husband and I took up their morning tradition. It really helps set the tone for the day. (This is my mom and me on Mother's day, at her assisted living home in Mississippi.)

At my father’s funeral service at the Protestant church in which he and my mother were very active, people were encouraged to “celebrate his life” and not to mourn. Over five hundred people packed the sanctuary, singing hymns, giving testimonies to the great things he did in his life. And then I spoke of the suffering he and my mother had endured during his fourteen month battle with cancer. About the ups and downs and the stress on their marriage. About how they came out victorious. And about how awful it is when one dies before they are old (My dad was 68, and had run over thirty marathons, including Boston and New York several times.) And people began to weep. Afterwards, several people thanked me for “giving them permission to mourn” my father’s death.

Here I am, nine years later, looking at grief through an expanded spectrum of loss. In the nine years since my father’s death, I’ve lost a twenty-year-old Goddaughter, a dear uncle and aunt, several elderly friends from my church, my mother-in-law and father-in-law, my brother, and most recently, my dear fr

iend, Urania. Through all these losses I have observed that grief does look different on each of us. For some reason, when I started writing this post, I thought about the Peanuts characters and how they’re always saying, “good grief.” It made me wonder, what is “good” grief?
I wrote about some of my grief in an earlier post, but not
since Ur

ania’s funeral on Monday. Urania was well known and well-loved in the community, so there were quite a few folks at the funeral. Her four children and four grandchildren loved her dearly, and there were many tears, but mostly smiles and thankfulness for Urania’s life, and for being part of her family or her circle of friends. She was eighty six and lived a full life and was ready to go be with her husband in heaven. I knew all this, but it didn’t stop the initial onslought of weeping which lasted a good bit of three days. Hard, gut-wrenching tears.

“I weep and I wail,” goes the Byzantine funeral chant.

At the cemetery Monday afternoon we threw dirt on her coffin after they lowered it into the ground. Then we sang Orthodox Paschal hymns, joyful songs about the Resurrection, like “Shine, Shine, O new Jerusalem!” and I cried harder. And the sky was amazing. Dark, beautiful clouds moved over the funeral tent just as we were about to leave, and the rain followed as we returned to our cars and to the church for the mercy meal. It was so hard to leave her there.

Nikolaos Vassiliadis says, in his book The Mystery of Death:

Death, an exceptionally emotional event, always evokes pain and grief in man. The Christian faith, which embraces man with special love, has always respected this kind of human pain…. The sorrow at the departure of our beloved ones… is usually expressed by sobbings, funeral lamentations, many tears and rending of the soul.

But the same author (who was part of the Orthodox Brotherhood of Theologians in Athens, Greece, where I’ll be on Saturday!) also says this about grief:

A rational man, however, and especially one who is a believer, must exercise restraint and prevent himself from mourning beyond measure. Too much mourning helps neither the dead nor the mourner…. He can and must overcome this sorrow and not allow it to overwhelm him.

How do we do this? What tools does the Church provide for our healing from this grief?

Because our love remains, our Mother Church has, from the very beginning, established the practice of saying special prayers for those who have fallen asleep, and on certain specified days it has memorials for them.

This helps: For forty days following the loved one’s death, it is a pious Orthodox practice to read a section of Psalms each day, followed by the appointed “Prayer for the Reposed.” Standing before the icons in our prayer corner at home, I read these Psalms and this prayer, and each day, my pain is lessened. My soul feels lighter. But I also look at my life with new sobriety, because I’m reminded that death waits for each of us. So, at least for forty days, I try to live each as though it might be my last. Of course I fail and go right back to slothful, selfish living over and over again, but maybe I won’t fall as far if I keep coming back to the Psalter and the Prayers for the Dead.

We leave for Greece this afternoon. Today I looked again at the wonderful book by Peter France, A Place of Healing for the Soul: Patmos. France was a BBC documentarian and host of The Living World and Everyman. But he was a self-proclaimed skeptic and agnostic of forty years. His book weaves the story of his conversion to Christianity throughout a beautiful travelogue and spiritual memoir.

One of my favorite passages in the book is on pages 81-82, where he describes a turning point in the way he approached faith. It’s an interaction he had with Father Amphilochios, who was known on Patmos as a man of great charity and compassion.

I recognized Father Amphilochios as a promising interviewee: he was firmly rooted in a primitive Christian faith which shaped his every waking hour…. Since he had experience as a missionary, spreading the Christian message among the tribal people of West Africa, it seemed fair to ask him about his techniques for enlightening unbelievers. I was one of them, and I was tackling him on behalf of liberal humanism.

I explained to him that I was a member of an enormous modern tribe that rejected the Christian message. This was not because we knew too little but because we knew too much. We understood the human psyche; we had analyzed the workings of the human mind, conscious and unconscious; we knew that religious faith was simply a compensatory mechanism that gave emotional reassurance to the insecure. We could not be deceived by myths, no matter how powerful their archetypal resonances. We sought the truth and, unlike Christians, saw no virtue in putting our trust in so-called realities for which there was insufficient evidence.

For the past three hundred years leading intellectuals of our tribe had examined the philosophical proofs for the existence of God and found them wanting. Our scholars had looked at the linguistic and archaeological evidence for biblical truths and had pronounced them flawed. Our biologists accepted a version of the story of life on earth that needed no external directing hand. So, we had abandoned Christianity after long and careful consideration of its claims and with some regret. That rejection was a consequence of our fearless pursuit of truth. “If you came,” I said, “as a missionary to my tribe today, what would you say to us?” I sat back, conscious of having put him on the spot. He looked at me with a smile and said simply: “I would not say anything to you. I would simply live with you. And I would love you.”

… When I heard these words from that man at that time, I experienced a shift in understanding. It was like the impact of great music. We all hear important truths many times in our lives, but it is only when we are ready for them that they penetrate.”

Someone very dear to me recently challenged me to a “rational discussion” about spiritual things. This person asked me to read The End of Faith by Sam Harris. I agreed to read it, if they would read A Place of Healing for the Soul. But I told this person that I have no desire whatsoever to argue. That I only want to be with them, and to love them, no matter what they choose to believe about God or anything else. Today I’m thinking what name I would give to a Christian apologetic if I ever wrote one (not that I would ever try to write a theological work) and all I can come up with is this: The End of Words. 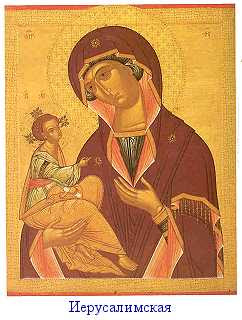 mos in a few days, I am anxious to be in the place where the beloved Apostle John wrote these words, “Little children, love one another.”

I’ll be home on the 24th… and I hope to post on my blog while I’m in Greece, so stay tuned! And as you go about your day today, remember to love.

P.S. Today is the feast day of The Jerusalem Icon of the Mother of God, painted by the Holy Apostle Luke. You can read about it here.
Posted by Susan Cushman at 10:02 AM

I trust you're having a wonderful time. Your blog made me think about the way we need to hold things tightly - not loosely - contrary to some advice. Your love for your friend is evidenced by your grieving. Her value to you, too. We all hold onto life while we have it. There comes a time when we can't hold on anymore, and hopefully, over time, our clenched fists relax, and we take another baby step towards trust in the One who takes His own home.

You write: "Standing before the icons in our prayer corner at home, I read these Psalms and this prayer.... I try to live each [day] as though it might be my last. Of course I fail and go right back to slothful, selfish living over and over again, but maybe I won’t fall as far if I keep coming back to the Psalter and the Prayers for the Dead." The last sentence is so real, honest, relatable, and so encouraging.