Patmos, Island of the Apostle of Love 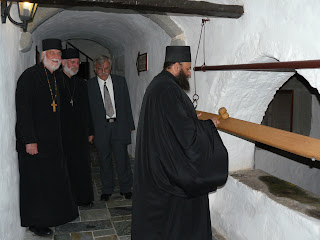 We visited the monastery of St. John this morning, and were welcomed into the office of the Abbot, Archimandrite Antipas for coffee and a visit before touring the monastaery churches and museum. Again the hospitality was amazing… to sit and “chat” with this man who is abbot of this amazing monastery… and to see him later vested and only a few feet from us among the crowd later tonight. A genuine, warm man, who acted as though visiting with us was the most important thing he had to do.

Later we venerated the relics of Saint Christodoulos in the small chapel of the Theotokos, surrounded by frescoes which were damaged by an earthquake in 1956 but still were beautiful. Saint Christodoulos founded the monastery in 1088. The monastery website will be in English (they told us) after Monday, October 22, so I suggest you Google the Monastery of St. John the Evangelist, Patmos, Greece for information and photos, as we weren’t allowed to take photos inside the church here.

At the museum I saw the original icon of St. John (Cretan c. 1500) that I used as a prototype for the icon I wrote of him this past year. A huge collection of mostly 16th century icons here. My favorite “style”…. And then I saw it: a much more Western style icon of the Holy Napkin (face of Christ) – the “Weeping Icon of Holy Mandylion” from the late 18th century. It was very humbling because it reminded me that God chooses when and how to show His grace… He is no respecter of persons… or icon styles! Here’s the story:

A woman named Irene Kontouri was abandoned by her husband to the U.S., leaving her to raise two children alone. She told the children she must sell their icon of the Holy Mandylion in order to buy food. They wept and begged her not to… and the icon began to weep. She took it to the church and people from all over Patmos came to see it. Her husband was contacted in the states. He came home to Patmos, repented and returned to take care of his family. The icon was placed in the monastery of the “Holy of Holies” for a time, but later moved to the Treasury of the Monastery (museum) so that many pilgrims could be blessed by it. I sat before this icon for a long time, sketched its setting (no photos allowed) and prayed to Christ for healing for my family and others.

Leaving the monastery we ate lunch at a café with a view of the mountains and sea. Had meatballs with wonderful unusual flavor… jasmine!

Back in Skala (our little village) later I shopped a little, finding some wonderful handmade leather thing sandles from Crete and a few more gifts. 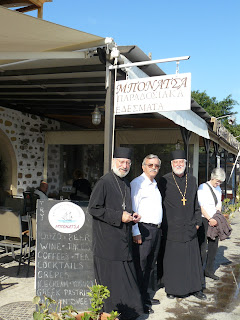 A light snack at Louka Grillis’ waterfront café, and then he drove us back to the monastery for the 3 ½ hour vigil. Many monks and priest (and lay people) were gathered not only for the usual Saturday evening vigil, but also the litia for St. Christodoulos. The bold, beautiful voices brought me to tears… with responsive chanting from two chanters stands … especially on “Gladsome Light” with a procession of priests making a semi-circle in front of the Abbot as 5 HUGE loaves of artos (special bread) were blessed. Louka’s cousin is a priest, and his brother is a chanter, and I watched the three Greek men gathered around the chanters stand and raising their faces, their hands, and their voices together as one. Later Loukas told us, “it’s a family affair.” (That's Loukas and his taverna at left.)

There’s a break after two hours … while some remain in the church reading the life of St. Christodoulos and other prayers, we joined the Abbot and other for coffee in a reception area, then returned to the church for the rest of the vigil. Well, we left at 11:30… it wasn’t quite over but our physical endurance was waning….

Asleep just after midnight, the only sounds I heard before morning was a rare thunderstorm…. And at 6 we were up for Liturgy at the Cave of the Apocalypse at 7! 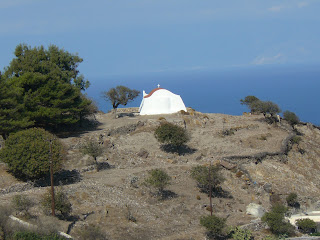 A cruise ship pulled into the harbor just as our taxi took us to the cave… where the priest-monk, Father Isidoras, was aided only by a 15-year-old boy, Dimitry, and three chanters. The four of us were joined by one Greek family… and then a steady stream of tourists from the cruise ship, who were escorted in one side and out the other during the Akathist and other 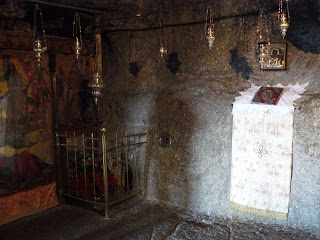 preparatory services. Thankfully the tours were over by the time Liturgy began.

It was surreal being in that cave where St. John heard the voice of God… saw where he rested, the place in the wall where he placed his hand when getting up… the ancient icons there… and the air of holiness. As the time for communion approached, Father Basil was asked to read part of the service, and then Father Isidoras handed the chalice to Father Paul to serve us. Something none of us will ever forget.

Coffee and refreshments near the cave afterwards with this one family and the priest and chanters was intimate and friendly… we only wished that we spoke Greek! Dimitry was our main translator… he is at the new boarding school in Patmos, but live in Thessaloniki during holidays. His poise and maturity astounded us.

From there the taxi took us to the Monastery Evangelismos (Annunciation) where the nuns had finished Liturgy and coffee hour. Sister Tabitha greeted us and gave a tour of the ancient church, the “new” (renovated) church, and Father Amphilochios’ cell. He was a spiritual son of St. Nektarios, and when he died in 1970, the bell outside the tower in which he lived rang of its own volition for 40 days!

Sister Tabitha showed us the iconography of Mother Olympia, the nun who 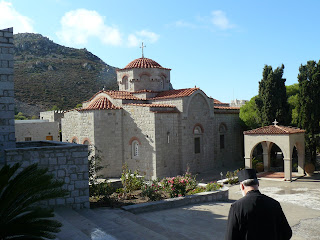 trained under Fotios Kontoglou (my favorite) and then trained the other nuns, and they filled the entire church (icon of Crucifixion, below, by Mother Olylmpia) with egg tempera icons. 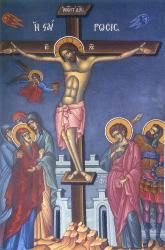 Again, wonderful filoxenia… a beautiful monastery with views of the sea…. more photos later... have to run soon...

Returning to Skala, we ate lunch at another outdoor café … this time the best lamb chops ever! As the others napped, I’m at the internet café writing… hoping to download photos and post this tomorrow. Our boat leaves at midnight tonight….with a sleeping cabin for the 8 hour trip back to Athens…. More later!
Posted by Susan Cushman at 2:04 AM

The link below is not the monastery one, which I could not find in English. If you click on "monastery," you can find some pics, though.

What a wonderful time for you all, in so many ways!