“Why aren’t you looking at me while I’m talking?” Terry said.

Terry was one of my fellow participants at the Creative Nonfiction Workshop held in Oxford on Saturday. The presenter, Lee Gutkind, had been going around the room asking each of us to share a little about ourselves, why we were there, etc. So, when it was Terry’s turn, as soon as she began speaking, his eyes starting scanning the room.

We all laughed at her indignant outburst and watched Lee to see how he would respond.

“It’s just that I thought you were a man.” Now he's really in for it.

Terry pointed to her (very attractive) hair style and said, “Do you know how much this cost? $60! I didn’t do this to be confused with a man!” 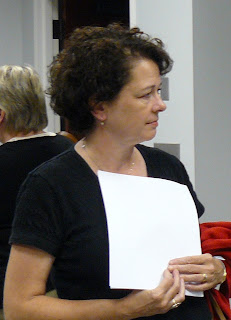 This is Terry. Beautiful woman. No gender confusion here.

But Lee recovered well. “You see, I looked over the registration list for the workshop and noticed that about 6 men were registered and 25 or so women. It’s an interesting ratio that I watch for at these things. So, when I read ‘Terry’ on the list, I thought you were a man. When you started speaking, I began looking around the room and counting the men.”

I knew it was going to be an interesting day. I was not disappointed. 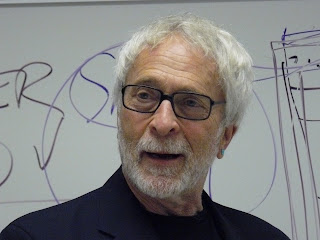 Not only did Lee do an amazing job of giving us the nuts and bolts of writing creative nonfiction in a one-day workshop; by the end of the day, the blackboard was full of interesting diagrams of all the components of the craft, connected with circles and lines like a family tree graph or a scientific formula. Good stuff. Hands-on stuff all of us could take home with us to give life and structure to the memoirs and essays and narrative nonfiction projects we were working on.

And he seamlessly wove our questions and comments throughout the tapestry of his lecture, making us feel that we brought something to the table.

“Stories are the building blocks of creative nonfiction.” 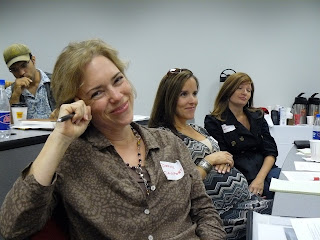 Lee talked about using fiction-writing techniques to write nonfiction. He showed us ways to frame our stories, embedding information into the scenes or alternating exposition with dialogue and action, representing a unified message. He talked about all the important stuff like point of view and dialogue and pace and research and reflection and intimacy. Yes, all that and more in six hours.

And then there was lunch. I was chauffeuring three other workshop participants downtown for lunch when we found Lee walking along the sidewalk by the grove. I rolled down my car window and said, “Hey, Lee? Wanna’ join us for lunch?”

So, he hopped in the back seat with the two others who were already there and off we went. Then I said, “By the way, we’re stopping at Square Books first so we can carry in some bundles of skirt! magazine that Memphis editor Leanne Kleinmann asked me to bring down. No problem. 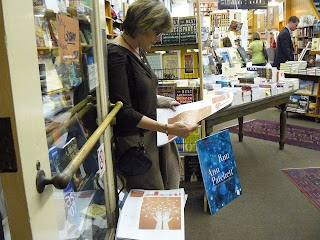 But I had to laugh at the scene a few minutes later. Four workshop participants and Lee Gutkind, Godfather of Creative Nonfiction, walking into Square Books with all these bundles of skirt! magazine. It was both humorous and humbling.

Then we headed down the street for lunch at Old Venice Pizza, where we got to pick Lee’s brain some more. And at the end of the afternoon session, we met downtown again… this time up on the 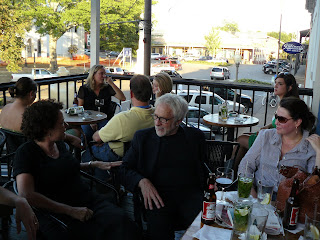 balcony of City Grocery, for drinks and reflections on writing and the South and football and books and religion and other yummy stuff. Stayed up there in the cool breeze until the sun set, savoring the new friendships and processing the new tools we were each taking home to help us continue our crafts.

In the midst of all that my good friend Daphne (from Little Rock) who spent the weekend and attended the workshop with me, had fussed at me on and off whenever I would say something kind of self-deprecating, usually about my writing. Or my weight. I was struggling with my book revisions and being a little hard on myself about other things and she kept reminding me to celebrate my essay being published in skirt! and just to, well, celebrate myself more. This wasn’t new. She’s always after me about this. (And she’s a trained counselor.)

So, back in Memphis she found my new issue of Real Simple Magazine and wanted to borrow it but I wouldn’t let her because I wasn’t finished reading it. This morning I opened it to Gail Blanke’s column, “The Motivator.” Gail’s a personal and executive coach, motivational speaker and author. This column was called “The Power of Praise.” It was about using the same positive reinforcement that we use on others—our children, our students, our coworkers, even our pets—but using it on ourselves. She talked about giving ourselves a “good girl!” pat on the shoulder every now and then. It wasn’t about being self-absorbed and prideful in an egocentric sort of way, but about acknowledging the good things you do, at least briefly, before moving on to tackle something else. 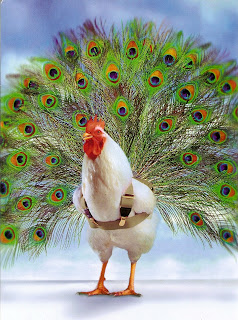 It always comes back to balance, doesn’t it? I love to celebrate, and I thought I had celebrated my essay, “myPod,” (in skirt!) a good bit already. But the point was that I hadn’t let the success bolster my confidence in a healthy way. To let a taste of “good girl!” settle into my psyche before moving on so quickly.

Somehow this image seems to fit. Maybe I can be a peacock and strut my stuff for a while!

Or… I can be a 50s swinger, which was what I morphed into for our dinne 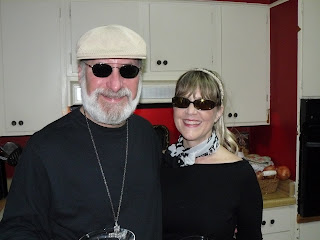 r club last night. The hostess wanted it to be 50s themed, from the martinis, meatloaf and mashed potatoes to the music and costumes. It was so much fun. Our church organizes these dinner clubs, mixing people from all ages and locations around Memphis together in these groups for six months or so. It’s been a smash hit with everyone. 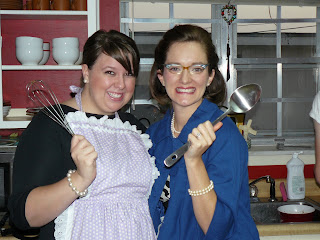 So, we had these two twenty-something gals dressed as the typical 50s housewives, greeting their husbands in high-heels and aprons, martinis in hand as the guys come in the door saying, “Hi, honey, I’m home!” 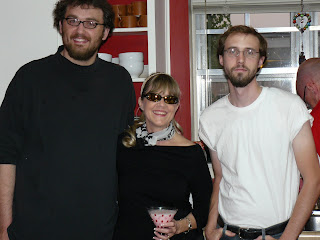 nocked-up teeny-bopper!) and the circle was complete. And the food was yummy! I had a “Pink Lady”—a martini recipe out of The Joy of Cooking (how 50s is that?) that included gin, grenadine, cream and a cherry! So we danced around our host and hostess’ kitchen to the sounds of Olivia Newton-John singing, “You’re the one that I want!” from the soundtrack from Grease and it was kind of magical. College students and grad students, a videographer, a physician/priest, artists and writers, sharing the best mashed potatoes and meatloaf I've had in a long time!

Thanks for a great party, Claire and Ethan!

And thanks for a great workshop, Lee!
Posted by Susan Cushman at 8:44 AM