Before the 2004 Olympics, there were reportedly over 70,000 ownerless dogs in the city of Athens (which has five million people.) The Olympic Committee worried that visitors would be bothered by them, although they are clean and friendly, just lolling around in the sunshine everywhere you go. There was talk of shipping some to Germany. I don’t really know what happened, but during our 10-day stay in Greece, we saw lots of them. Sissy petted them all and took pictures of many of them. 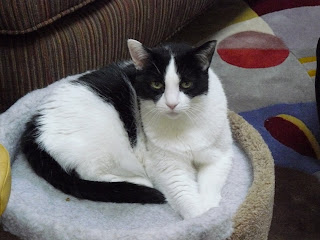 Me? I’m a cat lover. It was difficult leaving our 18-year-old cat, Oreo, (left) home with a sitter for twelve days. But when I found out the sitter was letting Oreo sleep with her, I knew we were in for it… sure enough, she’s been scratching and crying at our bedroom door since we’ve been home. Sigh. It’s good to know she was loved while we were gone!

Back to Greece… the felines weren’t to be outdone by the Athenian dogs… although we saw more cats in Leros and Patmos than in Athens… here are a few that caught my camera’s lens. Like the beautiful black and white number just outside the walls of the Monastery of Saint John on Patmos. She reminded me so much of Oreo!
And this one, on a ledge above Starbucks in the Plaka area of Athens (below).
In Athens, one cat sat on the chair beside me inside a restaurant! (wish I had 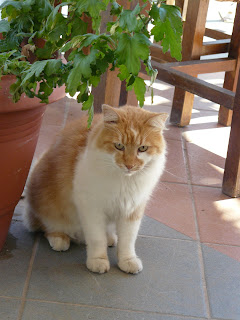 photographed him.) These next two are on the island of Leros... where the cans of catfood were 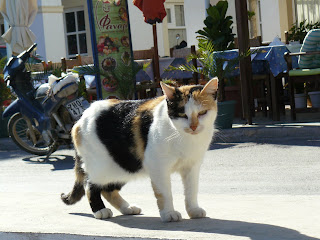 set out near the pebble road from our pension to the sea, nearby. 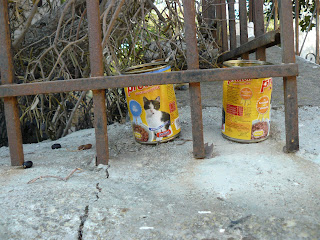 There were a few other interesting animals … like these ducks (below) that joined Sissy and me for a swim at Patmos! 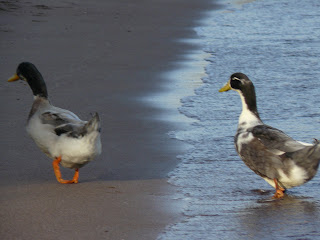 And the beautiful gulls chasing the wake of our boat to Aegina ... 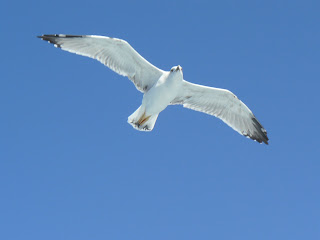 Greece is a beautiful place, and animal-watching was part of the joy of our visit. It's late and I'm too tired to download the pix of the rooster who woke us on Leros or the donkey or the chickens... but you get the picture!
Posted by Susan Cushman at 1:44 AM

My 11 year old and I enjoyed this post! Enjoy snuggling with Oreo!