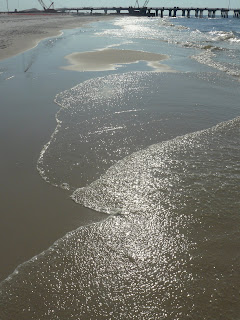 One of my favorite authors, Thomas Howard, opened his classic book from 1976, Splendor in the Ordinary (later renamed Hallowed Be This House) with this line:

The ancients used to hallow places. They set aside groves and grottoes and mountains, and built temples and shrines and enclaves. Places mattered to them…. Here was a holy well, and there was an oracle. Here was an altar, and there was a tabernacle. The landscape of antiquity is dotted with these things, and it is natural that it should be. If the gods are there, and if their influence touches our realm, then memorable things are going to happen, and we men do well to mark off the precincts.

As an Orthodox Christian, I get this, on several levels. The “religious” precincts we mark off concern our temple, our place of worship. And within our temple, the nave, the place where the people gather to pray, is marked off from the sanctuary, where the altar is, by the iconostasis, and the royal doors. Only those who serve at the altar step across the line between the nave and the sanctuary. It is a sacred place. 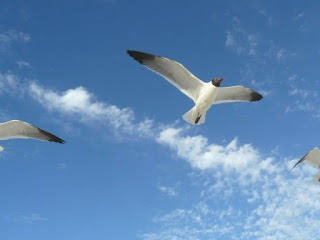 ut outside the temple, there also places that become sacred, but in a much less “religious” way. The places where certain events in our lives happened become special to us, like where we were born. Where we went to school. Where we had our first kiss. Where we were married. Special vacations and pilgrimages. Where we were when we heard certain life-changing news, like the death of President Kennedy. Or the destruction of the World Trade Centers. Or Hurricane Katrina.

So, as I traveled from New Orleans to Gulf Shores, Alabama, this past Sunday, I remembered places, events and people along the way. I remembered my honeymoon, thirty-eight years ago next month, at the Broadwater Beach Hotel in Biloxi, which had survived Hurricane Camille, but wouldn’t survive Katrina in 2005. Actually, the President Casino had opened on a riverboat dock at the Broadwater Marina in 1992. But on August 29, 2005, Hurricane Katrina tore the barge from its moorings and washed it ashore 1/2 mile west of the Broadwater Resort Marina. It’s been rebuilt, as the President Casino Broadwater Resort. I'm sad that it's a casino. The old Broadwater was so family-friendly and classy. It even had a lighted nine-hole par-three golf course you could play on at night. 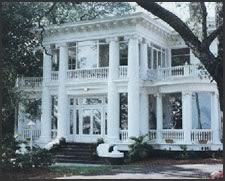 Another memory: I was on the beach in Biloxi on August 28, 2005, the day before Katrina hit. I had taken my mom and my daughter to visit my son, Jason, who was stationed at Keesler Air Force Base. We went to dinner at the The Chimneys, right on U.S. 90 (right)… an antebellum home turned restaurant where we ate out in 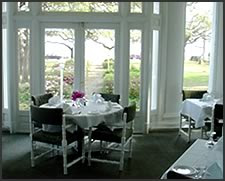 this sun room (left) with a view of the ocean. The Chimneys was destroyed by Katrina and I don’t know if the owners plan to rebuild or not, but it was sad driving down 90 and seeing the devastation, almost 3 years later.

So we kept driving east to Gulf Shores, which brought back memories of our 5th anniversary trip to the Grand Hotel in Point Clear (in 1975!) … and also my childhood memories of summers at Daphne, Alabama, on the Mobile Bay (1959-1967.) But more recent memories are the ones I started writing this blog about… just six months ago, when I took off to the beach alone. Because I was angry and wanted to get away. I wrote about that trip in my blog post of November 2 . So this time, I stayed at the same condo, with my husband and daughter. 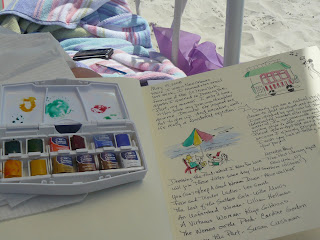 Beth gave me this awesome journal for Mother’s Day… she wrote some sweet words on the first two pages, and included some photos, and then gave me a tiny, traveling watercolor set to go with it! So… I wrote these two pages at the beach… the same place I began to let go of my anger six months ago. And as I walked along the 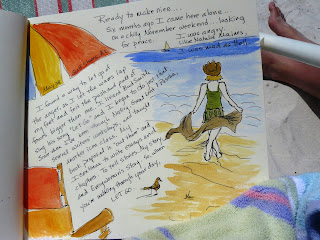 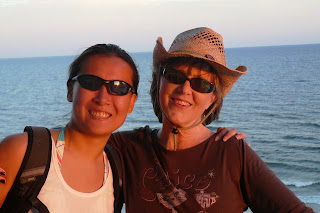 houses along the water that you see in Seagrove, but it’s quiet. Our condo was right next to a wildlife-protected area, so there were no buildings east of us at all. We read books, (well, Beth and I did… hubby worked on his lap top) and napped and went for walks and got lots of sun. 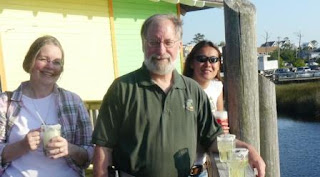 One day Beth ran into an old friend of ours from Jackson (Mississippi) at the WalMart, Sharon Meadows, so she joined us for dinner at the Original Oyster House one night. It’s on a little bayou… beautiful just before sunset. 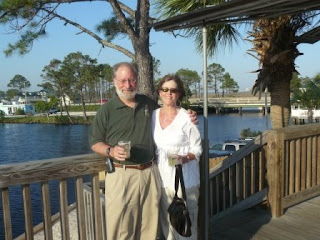 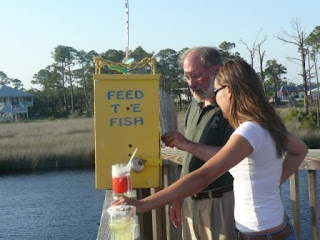 We tried to feed the fish … But we mainly enjoyed the atmosphere. And the food. Beth even tried her first raw oysters. 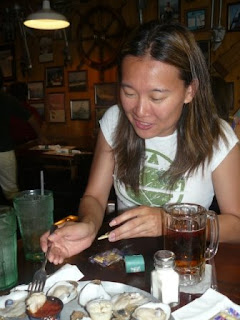 The next night we went to Lulu’s (owned by Jimmy Buffet’s sister) and enjoyed the atmosphere as much or more than the food. The band was a local group, Big Muddy. The lead 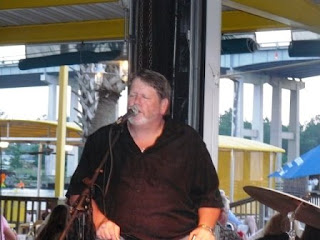 singer had a great voice and played a mean harmonica. 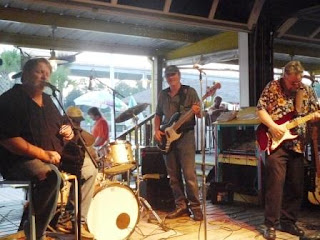 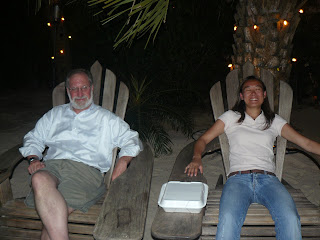 And these over-sized chairs were comfy….
The view of the bridge over the intercoastal canal was really pretty after dark. 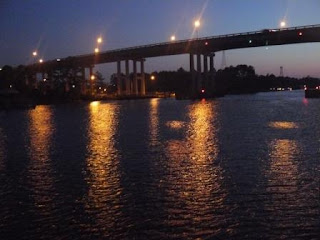 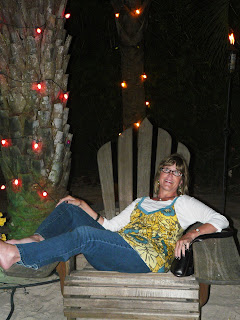 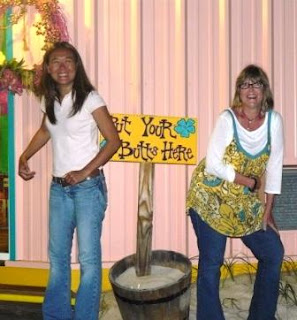 We caught Beth coming out of the gift shop and made her pose with me for this butt-shot!

The Dizzy Bean Coffee Shop provided us with lattes and wifi... and great atmosphere. 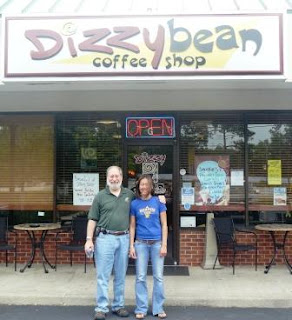 The weather was perfect and we’re thankful for this time to be together in such a beautiful setting. Yes, I think we hallowed it. We sure made some 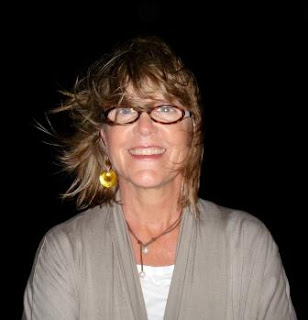 new memories. Our last night we went walking on the beach with flashlights and watched some little kids catching crabs with nets. There was this gorgeous moon, but it just didn't show up well in photos. But here are a few my daughter took with her camera, including the one that explains why I always wear a hat at the beach! Yikes!
Okay, here's the moon behind us ... again, really bad hair! 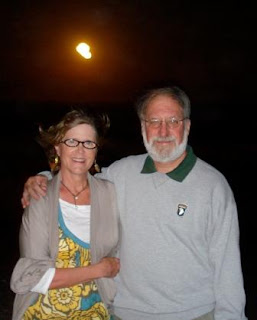 But these little girls catching crabs really reminded me of crabbing on the Mobile Bay when I was a little girl.... 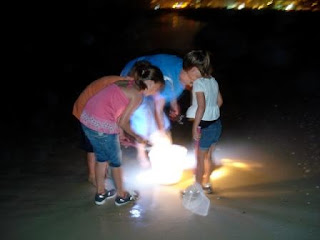 I'll close with a few more "day shots." They pretty much speak for themselves. 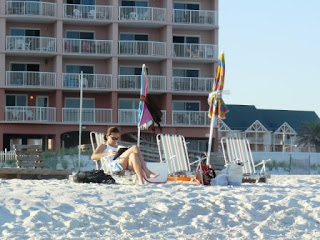 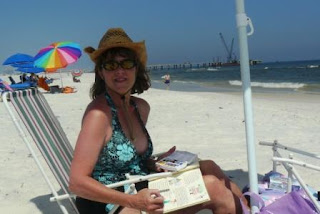 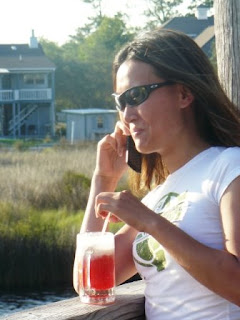 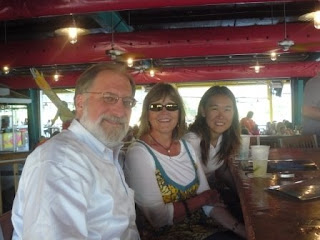 Posted by Susan Cushman at 3:29 PM