This Isn't The Last Dance 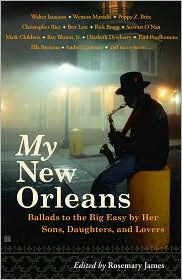 Rick Bragg wrote a great post-Katrina essay called "This Isn't the Last Dance" (published in My New Orleans) in September of 2005. I read an excerpt in our hotel room before heading out on a three-hour bus tour of the now almost three-year post Katrina city, especially the lower Ninth Ward. A short excerpt:
I cannot stand the idea that it is broken, unfixable. I watched the men using axes to hack their way into hundred-year-old houses to save people trapped there by the suffocating water... Just a few weeks ago, I spent a week there, walking along Magazine, walking into the Quarter, not minding the heat because that is what the devil sends, heat and water, to make you appreciate the smell of crushed cherries and on the balcony at the Columns Hotel.... How long before that city reforms? Some people say it never will. But I have seen these people dance, laughing, to the edge of a grave. I believe that, now, they will dance back from it. 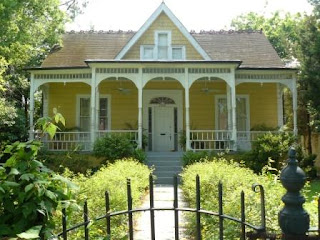 But wait, I'm getting ahead of myself. Before I share what I learned on the tour, let me back up to yesterday afternoon. After the tornadoes had cleared the parishes just north of the city, I ventured down Saint Charles on the street car, then walked part of 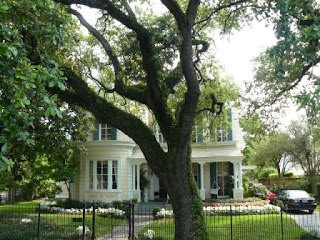 the same route back to the hotel, taking in the amaing ambiance and architecture. I'm highlighting a few of 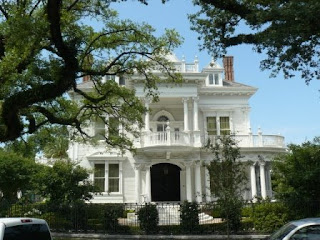 my favorite houses, like these... Our trolley stopped just as these kids were celebrating their graduation from Tulane, so eveyone on the trolley cheered for them and they waved at us. 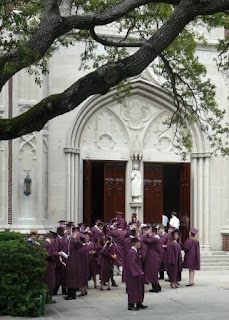 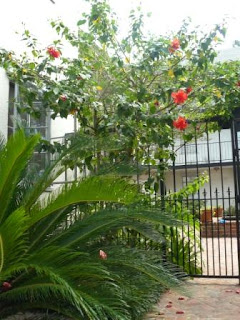 couple of pix of early signs of beautiful flowers...
and also this quirky bike rack, in front of an 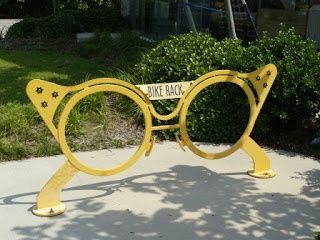 optometry shop.
Thurday night was the Faculty Dinner for ASH (American Society of Hypertension) and we were on top of the World Trade Center of New Orleans, with a great view down 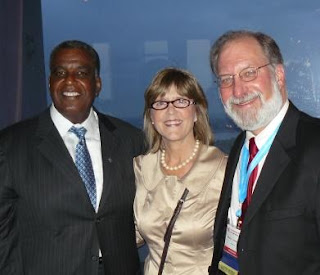 Canal Street one way, and of the river on other sides. It was the annual ASH meeting. It was great to meet Keith Ferdinand (pictured here wih me and my husband) a cardiologist who lost his practice in the Ninth Ward when Katrina hit. Insurance wouldn't pay for him to build back, so he moved his family to Atlanta. Keith was involved in the ASH initiative to provide free hypertension tests and treatment to some of the folks here in New Orleans last Saturday at the free health check fair in the French Market. Keith's daughter, Rashida, was featured on This Old House, renovating her shotgun home at 505 Lizardi in the Ninth Ward. You can watch the video here.
So, I boarded the bus in the rain this morning to tour the areas hardest 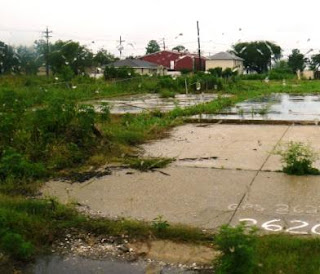 hit by Katrina. Our guide, Pat Dupuy, sustained considerable damage to her home in Jefferson Parish, but was able to move back in on November 8, 2005. She was one of the lucky ones. 80% of the city was flooded. The population of New Orleans was about 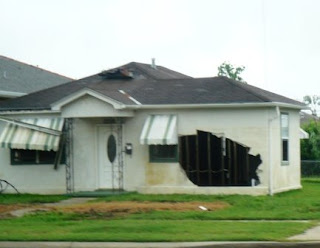 468,000 before Katrina; about 2/3 of the residents are there now. I won't share all the details here, but she recommended the book, Lost in Katrina, which I plan to check out soon. A few significant items of 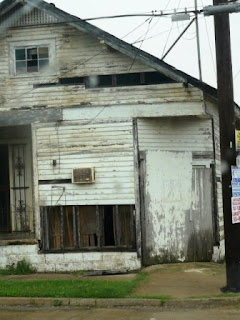 interest that I learned today: 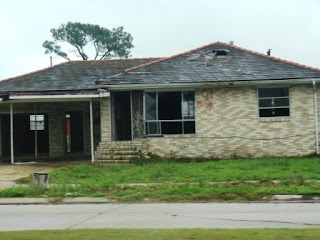 In Gentilly, 80% of the Vietnamese community are back... because they worked together to re-build. Community.
In St. Bernard Parish, home to the 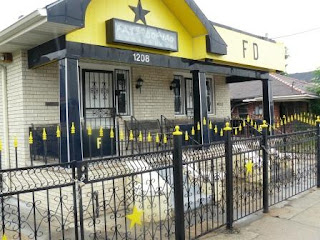 Lower Ninth Ward, only 5 houses were livable after Katrina. 5. Houses. It was a densely populated, mostly lower-economic area.

Here's Fat's Domino's house. (right, with yellow trim on the fence) He didn't leave the Ninth Ward, so he ended up in the Superdome, then in Baton Rouge. But he wants to come home. His house, like so many, is surrounded by blight. Some people come back and renovate while others don't. It's like a ghost town. 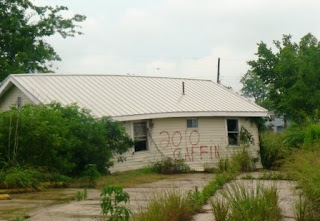 This house used to be on Caffin Street, but Katrina picked it up and moved it to another street!
There's so much more to say. But I'll let the pictures do the talking. We did take a break half way through, stopping at the Botanic Gardens for 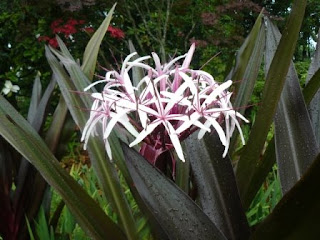 snacks. I snapped this gorgeous flower as a reminder of the beauty that can be recovered. Over 800 volunteers have helped replant at the Gardens. But it will take years. And lots more volunteers, to replant the homes needed to rebuild the communities that have been lost. One of the places you can read about this is http://www.makeitright.org/. They're doing some "green" building here now. And we drove past these colorful homes in "Musicians' Village," re-built by Habitat with help form Harrick Connick, Jr. and others. Okay, it's time to download photos. And sit quietly, trying to take it all in. Lord have mercy.
Posted by Susan Cushman at 4:13 PM