Posting from the Dizzy Bean Coffee Shop in Gulf Shores, Alabama… I drove down spur of the moment on Thursday, needing to stand beside the ocean and feel small. Been nursing some unhealthy anger. Been singing along with Natalie Maines (Dixie Chicks) too much (“Not Ready to Make Nice”)….
Anyway, home from Greece for a week and feeling the call of the beach once more before it gets cold. Actually, it was one year ago this weekend that we discovered Seagrove…with our son and his friends. But Gulf Shores is a shorter drive, so I booked a one-bedroom unit and hopped in my car at 7:30 am on Thursday. 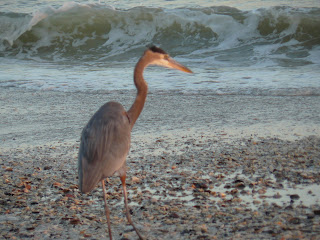 was just outside Mobile my car started SHAKING. Yes. So I pulled over on the shoulder, got out and checked my tires. None were flat, but something was definitely wrong. I crept along til the next exit and just a little ways down found Trax Tires in Theodore, Alabama. I had treads coming off one tire and another about ready to blow! My guardian angel was working over time (again)… and thanks to Chris and Andre at Trax, I was on my way in time to make sunset at Gulf Shores. (with 2 new tires and all 4 rotated) 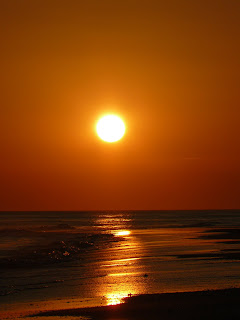 The Royal Palms is a great place… found on the internet… next to a park, so kind of secluded. After a sunset walk (see photos!) and a swim in the heated indoor pool and hot tub (what arthritis?) I was ready for supper. Some locals on the beach told me about Lulu’s. (She’s Jimmy Buffet’s sister.) What a great place! Mahi tacos, nice folks (from Michigan!) at the bar, and “The Relics” (below, right) turning out great tunes. Bud Smith has a few CDs so I bought one… especially love his single, “Let Go,” which spoke to my anger issues. Found out they’re playing at Fairhope’s art night Friday night, so I’ll probably head over for it. 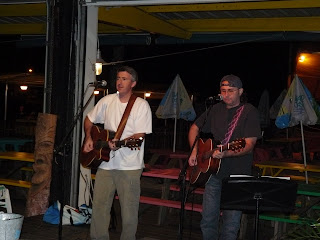 Looking for Wal Mart ( to buy a beach chair and umbrella for Friday) I found this beautiful Greek Orthodox Church which looked so much like the ones in Greece! 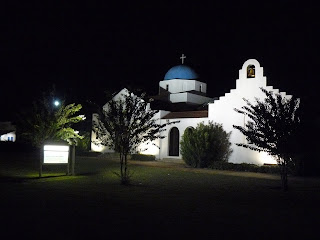 Asleep by 11 and up for sunrise, I took my first cup of coffee on the balcony, reading an amazing interview with Anne Lamott in the latest issue of New Letters. (which also has a poem by Floyd Skloot, father of Rebecca Skloot, new director of the River City Writers Series and prof of creative nonfiction at Univ. of Memphis (see my blog post of Oct. 29). Anyway, Lamott talks about writing fiction and creative nonfiction, saying “we use novels to tell a certain kind of truth…" which encourages me to get back to work on The Sweet Carolines. Listen to this:
The truth is often not convenient, and it relies mostly on what we can see and hear and remember, or get down on index cards, or verify. The truth of being human and having been born in a certain time and space is really ethereal and odd. It’s almost like an alternate universe.

But she likes to write creative nonfiction essays because “… I really love the immediate gratification of those 2,000-word pieces.” Me, too! Which is why I’m working on two or three essays right now instead of the harder work of revising my novel! (Well, one reason.) As Lamott says:

A novel is a pretty jealous mistress, you know? It takes a certain kind of stamina….

About 7:30 I take my 2nd cup of coffee for a walk on the beach, and meet “Cajun John” Duos. He’s fishing. No shirt. Nice, tanned torso. I’m thinking he’s a local beach bum who lives in a trailer across the road. Wrong. He owns a penthouse unit in the condo I’m renting… he’s a retired grandfather, living outside Atlanta. Bought the condo so his grandkids from Louisiana could meet him for easy visits here. I watch him casting, and later setting out crab nets. Again 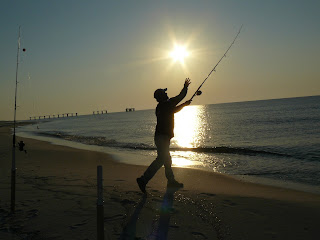 I’m reminded of my childhood vacations around the corner at Daphne, Alabama…. 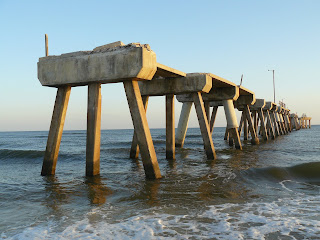 John asks if I heard about the boat that crashed into this pier last night ... entire family ended up in the hospital. It's an old broken down pier with no blinking light on the end... sigh... 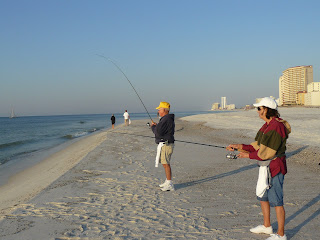 Brentwood, Tennessee, who’ve been here for a month. They freeze most of what they catch and take ‘em home for fish fries in Tennessee.

By 9:30 I’ve got my chair and umbrella set up and I start writing. Butterflies circle around me… and a few birds, but all in all it’s quiet. I’m able to get significant work done on a creative nonfiction essay I started back in Memphis. Working titles: “Painter Unblocked,” or “Ready to Make Nice.” Unblocked with much help from a dream about a baby that fell off a mountain side because i opened the gate but the child didn't die... but almost did... and about a young mother pregnant with twin boys... which has all kinds of yummy Jungian meaning for me...but I'll save that for my essay.... (hint the child is my ego and the male twins are writing and painting....)
A plane flies overhead pulling a banner advertising Willie Nelson who will be performing at The Wharf Saturday night… I’ll be in Little Rock by then, God willing.

Okay… off to the Dizzy Bean for a latte and wi-fi… I’ll write about Fairhope next time… if I get there tonight, that is. It’s going to be pretty hard to pull myself away from another sunset on this beach….
Posted by Susan Cushman at 2:29 PM

I feel your pain about the tires - I'm glad that ended well.

Looks like a lovely little getaway. And I didn't know about the Ann Lamott interview - I'm so glad you posted the excerpts from it. I just love her.

I've been meaning to email you for a solid week...