Not Quite Wordless Wednesday 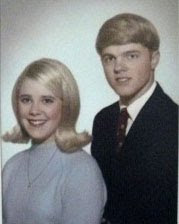 I thought about saving this post for "Wordless Wednesday" and only posting a photograph of my brother, but then I decided that I wanted to make a few comments, so here we are.... 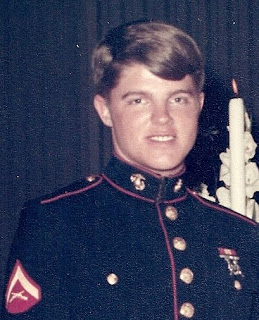 Today is the 4th anniversary of my brother’s death. Mike (Johnson) was only 57 when he died of lung cancer on January 30, 2007. I wrote a reflection about his death three years ago, here. 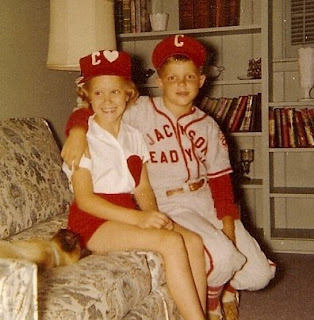 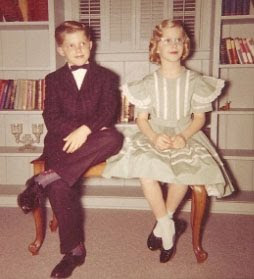 … and a couple of years later, dressed up for a piano recital…. (He was much more gifted than I was. By high school he was playing lead guitar in a band.) 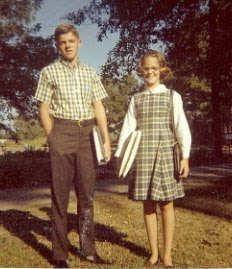 And here we are on my first day at Chastain Junior High (7th grade) where Mike was a 9th grader.

Every year the pain gets worse, rather than better. I’m already on my 3rd glass of wine, just looking at these photographs. Death, and the loss of a loved one, is never easy. But it’s especially painful when there are words that never got spoken. Hugs that never got given. Understanding that came too late. That’s how I’m feeling tonight, as I think about my brother’s death. We were only 15 months apart, and once we survived childhood (we both suffered a lot of emotional and verbal abuse from our mother) we became close friends as teenagers. 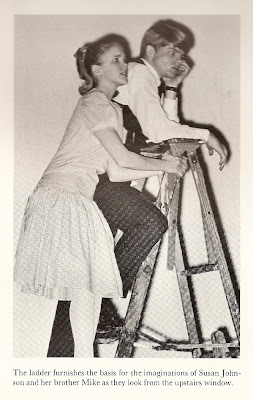 During my sophomore year at Murrah High School, when Mike was a senior, we even double-dated, acted in a play together (see photo—“Our Town”), and went on church retreats together.

In 1970, Mike made it home from the Philippines (Marines) for my wedding. But the decades that followed found us drifting apart, as we chose contrasting lifestyles. We dealt with our “issues” in different ways, and it wasn’t until Mike was on his deathbed (I was with him when he died) that I realized that we might could have helped each other if we had communicated better. If we had been better listeners. 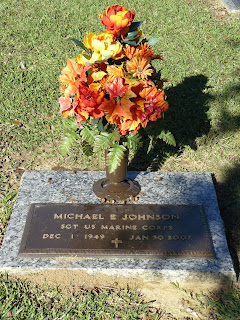 I won’t be driving down to Jackson today, but on my next visit, I plan to stop by Natchez Trace Cemetery and visit his grave again. I’ll pray the Orthodox Prayers for the Dead, and maybe sit on a bench under a nearby tree and just remember him.

blessings to you Susan. I lost my brother in a plane crash 14 years ago, but the sadness lingers. The words not said, etc. And that causes us to remember all those other people who have died, and the sadness increases, then wanes after a while. For me, the process of moving through that, time after time, results in a deeper knowledge of the gratitude that has arisen for who and what I have. And the sadness never really goes away, it just seems to lie fallow.

I'm glad this wasn't a wordless Wednesday. Fortunately, I haven't lost a sibling, but your words are a reminder that one shouldn't let ties with family and friends go dormant, thinking that there will always be more time to spend together in the future. Thank you for a post that certainly must have been difficult to write. Take care,
Frank

Thank you, Susan, for sharing the inner workings of your heart. I think this is why I enjoy your writing so much.

Your post made me think of my own two sisters, both of whom are older than me. While I have not lost either of them to death, I have lost the oldest to indifference. I know she has her reasons, but she had chosen to cut off most of her family and has nothing to do with us, including two of her three adult children. Your comments made me realize that while I don't often think about it, it does affect me very much that I don't have a relationship with her, and I grieve the loss of missed opportunities as well. I can only imagine how her children feel. It is a subject we don't often speak of - too much pain and anger involved. Like the Meechams and the Wingos, we just act like it didn't happen or that she doesn't exist. She is the nameless one in our conversations.

I thank you because I so needed to be reminded of her and to learn from her - that this is not how I want to live my life; that I need to value and nurture the relationships I do have with family and friends.

I just have to say that your writing reminds me of Pat Conroy in that you write from a very deep place inside, and you are very honest and open with yourself. I can't wait until your book is published!

Wishing you peace and healing,

Oh, Susan. Just the way I feel the pain gets worse not better.
I am praying that we can find a little comfort in all of this happening to us now in this part of our lives. Thanks for writing such a beautiful peace. I enjoyed reading it. You have helped me....

Emma, Frank, Bob, and Mary: How interesting that my new friend, two friends from high school, and one Facebook friend leave such deep comments here--all bless me very much. Thank you. Bob: I'm printing off your words about my writing reminding you of Pat Conroy and taping them to the wall by my computer for days when I feel like I can't write. Pat is my favorite author--that was the highest form of praise! About your older sister, my brother also cut off communication with the family for a while, but I wish I had tried harder to break through while he was alive. Just saying.
Thanks again, everyone!!!

Beautiful post and such wonderful pictures. You've moved me to tears, Susan. Can't wait to read your post tomorrow for Jane.

Beautiful post, Susan. I've lost two of my sisters and it is still sad. There were four of us sisters - no brothers. I loved the photos too...

My cousin sent your blog site to me - thinking that since I have been blogging for several years that I might know you. I grew up in Memphis but have lived the past 5 years in the Pacific Northwest.