Pour yourself another cup of coffee and get ready for a long post…. as I attempt to turn my experiences at the 2008 Mid-South Creative Nonfiction Writers Conference into words. The conference theme was: “Travel Writing & Memoir—Turning Experiences into Words.”

Okay, I’m actually going to use lots of photos for this post, which should make for a fun 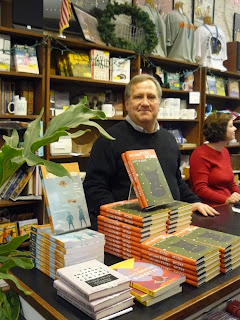 read on a Monday morning. I’ll open with Dinty Moore’s pre-conference workshop on Thursday. It was a manuscript critique workshop. Eight of us submitted a memoir-in-progress ahead of time, received the other writers’ pieces via email, and came prepared to participate in the group critique of each piece.

Dinty got us started with a few pointers about writing memoir. About experience and artifact… about taking what happened and how it felt and creating a shape, style, and voice in order to present it to the reader. His words about frame, structure, point of view and voice weren’t new to me, but obviously things I need to learn over and over again. But his emphasis on discovery was eye-opening. In Dinty’s words:

What’s the piece about? Struggling with this is what lifts the writing off the page and makes the reader care… it gives the reader a sense of discovery.

As our group of eight writers critiqued each other’s manuscripts under Dinty’s guidance, I experienced several “aha” moments. When several people have the same response to a certain aspect of your writing, you sit up and listen to what they’re saying. And then when you see strengths in the other writers’ pieces, the workshop becomes an even more valuable show and tell for the craft we’re all struggling to hone.

I was encouraged to keep my writing alive by lessening the confident tone and leaving more mystery. My “take home” challenge was to give my work more compression, in order to be more reflective. 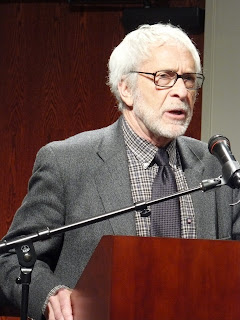 An over-arching theme of the conference was STORIES. Lee Gutkind (left) harped on this back at 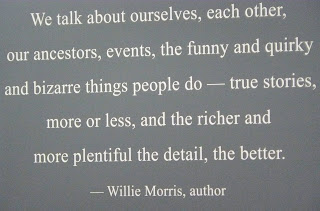 the Creative Nonfiction Conference in the fall, and we heard it again, over and over. It’s interesting that one of the quotes painted on the walls in the journalism building where we met was this (at right) from Willie Morris. 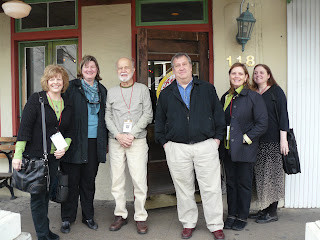 Our group enjoyed lunch out with Dinty at Ajax on the square before returning for an afternoon of continued critique work. 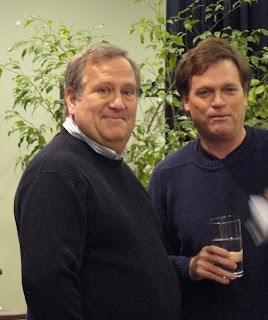 At 5:30 I returned to the Thacker Mountain Radio Show at Off Square Books to hear Dinty read from his memoir, Between Panic and Desire, which I reviewed in an earlier post, here. 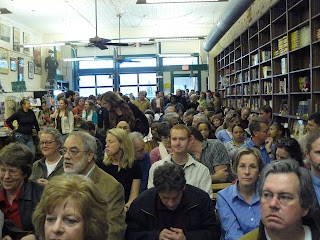 One of the musical acts that night was Caroline Herring, one of the show’s founders, and now a mother of two. I snatched up her new CD, "Lantana," at the end of the show. I loved her acoustic guitar playing and lyrical folksy sound.

A reception at Pearl Street Pasta completed the evening. You can see how quickly writers bond when we’re intensely working on our craft 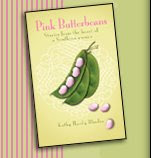 together all day and then get to relax in the evening. That's Sarah Einstein, whose brilliant memoir-in-progress inspired us all during Dinty's workshop, and Kathy Rhodes (middle) who is already a published author, with me at Pearl Street. You can order her book, Pink Butterbeans, here.

Friday brought another manuscript critique workshop for me, this one led by Kristen Iversen, who teaches in the MFA program at the 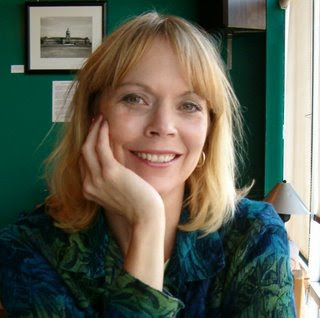 University of Memphis and serves as Editor-in-Chief of The Pinch, the literary magazine of the U of M. Her latest book is Molly Brown: Unraveling the Myth. There were only four of us in this class, which left plenty of time for some craft teaching by Kristen. As my fellow writers took my work to task, it was interesting to see how people from outside the South responded to my memoir, about growing up in Mississippi. But it was more helpful (and yes, sometimes painful) to hear the common thread in their response to my work:
The narrator’s voice is strong, but her character isn’t clear enough… I’m not showing why she feels the way she does. Some of that can be fixed with structural changes, but I think Carol (one of the workshop participants) nailed the issue when she said, “Is she (narrator/main character) using clothing as a substitute for being?” (The memoir uses clothes as a frame.
Another reception Friday evening, this time at The Memory House (which was the home of 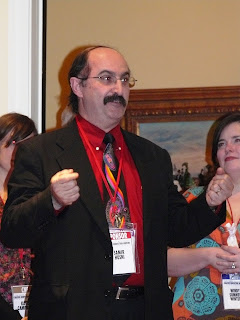 William Faulkner’s brother) gave us another opportunity to relax together, and to hear a few words from Lee Gutkind (Conference Director and founder and editor of Creative Nonfiction) and Samir Husni (right) the Chair of the Journalism Department at Ole Miss. 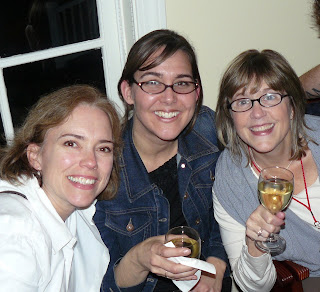 My friend Daphne (from Little Rock) and my Goddaughter Katherine (from Memphis) arrived on Friday for part of the conference, so it was great fun to pal around with them as encourage each other in our creative pursuits.
Saturday brought the panel discussions led by writers, professors, editors and agents from all over the country. It was inspirational to see the varied personalities of editors like Charlie Conrad (Doubleday/Broadway) and Ole Miss grad Webster Younce, as well as Conde Nast 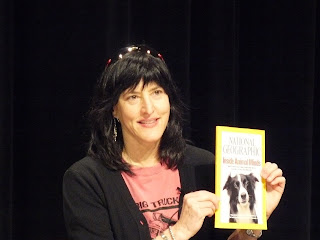 Three writers shared their stories: Mike Rosenwald (staff writer at the Washington Post), Virginia Morell correspondent for Science, and regular contributor to National Geographic, and Rebecca Skloot, (freelance writer and creative nonfiction professor in the MFA Program at the 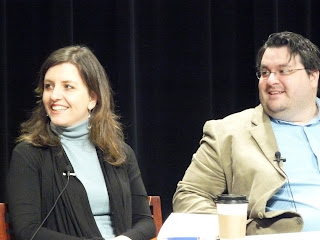 Literary agent Gillian MacKenzie completed the panels and endeared the audience with her warmth and accessibility.

The “One-on-Ones” offered the opportunity for writers to 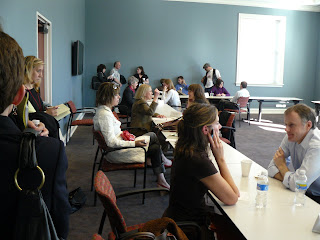 pitch their ideas for magazine articles or book proposals to these folks. This was a new experience for me, and the scene was charged with high hopes and insecurities. It looked like a casting call, as we stood in lines for our three minutes with each editor or agent.

During lunch I had prepared my “pitches” …. two book proposals and two magazine/essay ideas. The book proposals were for two actual works in progress. In the world of creative nonfiction, editors and agents like to hear the pitch first, whereas in the world of the fiction novel, they seem to prefer a complete manuscript. In every case, published clips are a plus, so I was armed with copies of my three recent published essays. 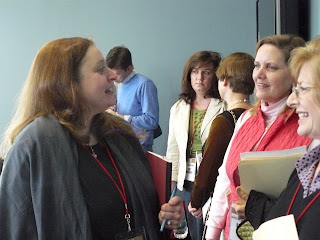 It was fun watching my fellow writers as we stood in the lines together. Some were practicing their pitches with each others. Others were laughing and chatting nervously. One woman told me she thought she might throw up. At first I didn’t want to chat with anyone because I want to “practice my lines” …. but after a while I found the conversations relaxed me. As I allowed others access to my feelings, I took an important step towards becoming more real. I bonded with other real humans who were courageously putting their treasures on the line with these strangers who held power over our futures.

Looking across the room at a new friend who just finished their pitch to one of the editors, I’d raise my eyebrows and shoulders, body language for “how did it go?” and they’d give me two thumbs up and a smile, or sometimes a “so-so” flip of their hand and a painful half smile.

I was pleasantly surprised at how helpful and encouraging the book editors and agent were, giving me concrete feedback and specific help for my works in progress. They named published books that dealt with similar themes, asking how my work would be different, would stand out from those… and how it would be similar in its appeal. Thankfully, these were books I had read, so I was able to give a half-intelligent response!

One of them asked for my published clips, which I handed over, and then asked me to email a sample chapter of one of my works-in-progress. I’ve got my work cut out for me now, to choose the “best” chapter and revise it and polish it before sending it off. Do I hurry to send it before they forget who I am, or do I take my time and make it the best it can be? Hopefully I’ll find my way as I begin the work of revision this week.

Lee Gutkind had to hurry off on Sunday (for China!) before we were able to properly thank him for his work in making the conference so wonderful. His new book, Almost Human, is a six-year project involving research in robotics. Have a great time in China, Lee!

Neil White, Creative Director and Publisher of The Nautilus Publishing Company was one of the 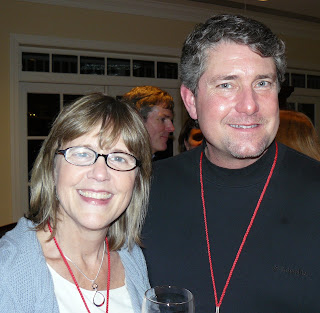 conference hosts, and gave the parting words after another wonderful panel on Sunday. He was also wonderfully helpful in shuttling people around the campus all weekend, collecting our parking tickets (“they’re not real cops here”) and watching over the flow of the conference with efficient attention and care. Thanks, Neil! (that's Neil with me at right) We’ll be watching for his memoir, The Outcasts, forthcoming from William Morrow/Harper Collins. It’s a story about the year he was imprisoned in the last leprosarium in the continental United States. Wow.

The conference was video-taped, so watch the Creative Nonfiction website for future podcasts, as well as the University of Mississippi’s Department of Journalism.

Katherine had to return to Memphis on Saturday, but Daphne and I spent Sunday afternoon enjoying the sunshine and ambience of Oxford…. Drinking lattes on the patio at High Point Coffee, visiting with other conference participants who were still hanging around, and bouncing ideas off each other.

We drove through a neighborhood just north of the Square, lusting over the be 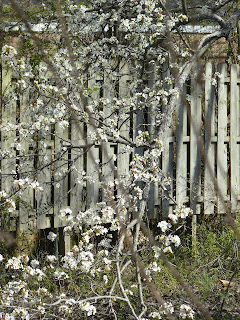 autiful historic homes and dreaming of living there. We even peeked in the windows of this home which has been lovingly renovated, and probably has a huge price tag. In the empty lot next door, early spring blossoms whispered good wishes for our own regeneration.

A brief visit to Off Square Books for some magazines and it was time to say goodbye and begin our separate drives up I-55 to our homes in Memphis and Little Rock.

Of course we talked on our cell phones most of the way, not wanting our time together to end. And still so stirred up by the creative energy of the conference… and the strong sense of place that being in Oxford always brings.
Posted by Susan Cushman at 9:52 AM

You've done a lovely job of summarizing this amazing conference - the pictures are wonderful. It was so fun to discuss and learn about creative nonfiction and "memwah" (you say that with such class). SW

It sounds like a dream! Thanks so much for sharing about the conference. It sounds incredible!