It's Bright Week. Christ is Risen! Indeed, He is Risen!

And yet the cares of life can so easily ensnare us. Near the end of Holy Week, all during Pascha weekend, and early in Bright Week, I allowed some of those cares to steal bits of my joy:

Let's start with Comcast. We "bundled" our phone, internet and cable television services a while back. No problem. Except that suddenly our phones started cutting out. So I called Comcast. Five times in 3 days. Spoke with 4 customer service reps and one superviser. In the process of "resetting" our phone line, one customer service rep disconnected our internet. Finally it came back on. And finally a real live body showed up, on Tuesday, to make repairs. He said that the Comcast person who bundled our system didn't completely disconnect us from our previous server, AT&T, and that was causing the problems. He "fixed it." Or so he said. It's cutting out again.

Smaller "cares" have included the air-conditioning and heating going out, the garage door getting stuck, and the vacuum cleaner breaking, all during Pascha weekend and Bright week. 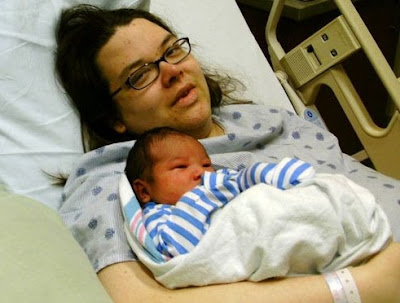 But just as I was losing my grip on my Paschal Joy, I was brought back into focus by a legitimate care: the death of 29-year-old Esther Elliott Longa on Monday night. Esther had given birth to her first son, Elliott, on March 4, but had complications and was in ICU for almost five weeks before her death. She grew up with my own children here in midtown Memphis, and I've known her parents, Deacon Sidney and Mary Elliott, for 40 years. Her older sister, Sally Elliott Boyle, is a dear friend of mine. Suddenly "cares" came into perspective.

Last night at the Trisagion Prayers and visitation, the church was full to overflowing with family, friends, co-workers, and church members. Father John Troy gave a beautiful homily and the choir sang joyous Paschal music. It was a surreal mix of Bright Sorrow.

My daughter, Beth, drove home from graduate school in Knoxville for the funeral, and especially to see her friend, Rebecca, Esther's younger sister. (Beth was between Rebecca and Esther in school.) It was comforting to have her with me last night and this morning for the funeral. 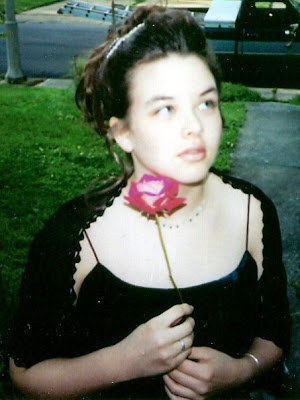 As we went by the family to speak to each of them, I approached Esther's mother, Mary, and wept in her arms. The first thing she said to me was, "How is Jason doing? Rebecca (her youngest daughter) told me he was in the hospital. Is he okay?" She was burying her daughter and she was asking about my son, who was at that moment having his appendix removed in a hospital in Denver. She is one of the most unselfish, loving women I know. It was very humbling. 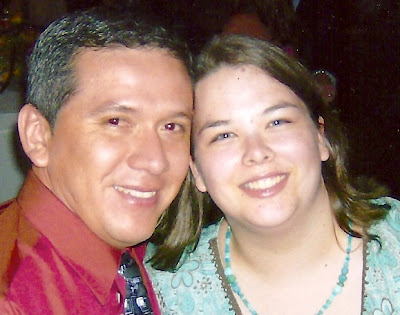 At the end of the service, after everyone else had gone up to give Esther a final "kiss of peace," her family also filed by her casket. The last to do this was her husband, Luis, holding their five-week-old son, Elliott. I was overwhelmed with emotion at that moment, realizing, as I had the day before when I held Elliott for the first time, that he would never know his birth mother. And so I wept for Baby Elliott. But I also gave thanks for his loving father, Luis.

I'm getting ready to go back to the church for the funeral at 10:30 a.m., so I'll close by sharing the text from the memorial brochures which will be given out at the funeral this morning. There are details about making donations to help Luis with all the medical expenses and with the baby. I just posted the same information in a note on Facebook.

We love you and miss you, Esther. May your memory be eternal!

Esther Longa was born on November 29, 1980, in Memphis, Tennessee. The second daughter of Deacon Sidney and Mary Elliott, Esther brought light and joy to all around her with her feisty spirit and radiant smile. Along with her parents and sisters, she was Chrismated into the Orthodox Church in March of 1987, when she was six years old. Esther went to Snowden elementary and junior high school, and graduated from Central High School in 1999. At Millsaps College in Jackson, Mississippi, she was active in Phi Mu sorority, participating in many community events, including Habitat for Humanity.

Following graduation from Millsaps College in 2003, Esther worked in banking (NBC, SunTrust) for five years before starting her own Spanish-English tutoring business in 2008. On September 10, 2006, she married Luis Enrique Longa at St. John. They enjoyed a happy married life together, buying a house in Bartlett and traveling to Luis’ native country, Peru, twice. Esther found out she was pregnant in July of 2009 and excitedly spent the next eight months preparing for the birth of her son. Due to complications, Esther gave birth one month early to Elliott Luis Longa, on March 4. Three days afterwards she developed pneumonia and, subsequently, ARDS (acute respiratory distress syndrome). On April 5, Esther died peacefully with all of her family (including her one-month-old son Elliott) and two priests there with her.

“There are only two ways to live your life: one is as though nothing is a miracle. The other is as if everything is.”—Albert Einstein

The interment will be at Forest Hill Cemetery, 2440 Whitten Road, immediately following the funeral service. All are invited to a mercy meal in the parish hall after the interment.

The family would like to thank everyone for their love, support, and prayers. In lieu of flowers, donations to assist with medical expenses can be given to St. John Orthodox Church noting “Esther Longa” on your check.

I'm sitting here a big puddly mess of tears. What a beautiful young woman, and taken too soon.

May her Memory be Eternal.

Bright sorrow is the truth - a bright week funeral is both difficult and glorious (my grandmother died on Bright Tuesday) We so wanted to come for the funeral, and my heart breaks for the Elliotts. I was so thrilled to see the photo of her holding the baby, the limited info I have gotten led me to understand she never got to hold him, I am so glad that is not the case!

Thank you Susan for all the kind words about our Esther and the rest of my family. I've been wanting to write something about her... I'm just not sure how to go about it yet. I love you soo much!

Susan, I'm so sorry for your loss. How sad and tragic a loss. You write eloquently of her, and I know your words and embrace of her family is the beginning of the healing that will take place. Blessings to all of you!

I have not words for how much of a loving sweet person Esther was. I was fortunate to know her for several years and even though we lost touch for a while....she has always been my best friend.

Hi, my name is Marian Bacon. Esther was a wonderful Spanish tutor. We were looking forward in working together in Fall 2010 for Spanish 2010 and 2020 working towards my Associates Degree at Southwest Tennessee Community College. I was in total shock to read the link on her Facebook page three weeks ago.

Yes, I know it was a total blow especially to her husband at a critical time in the life of little Longa. It won't be the same trying to learn Spanish because of my dyslexia. Esther understood individuals with disabilities and helped me make two B's in Spanish classes.

May Esther's memory be remembered for years to come. I'm praying for husband and baby during this difficult time in their lives.

Hi, very late night was just trying my best to sleep but all could think about was Esther. She would call me late into the night making sure I understood Spanish assignment, which professor had just given me that night. I would tell her "kind of" and Esther told me that we could meet before work or during my lunch break in order to get the material.

Esther was a very busy woman with full of talents, which she was willing to share with all her students.

I cried at least thirty minutes in the bed just wandering "what heaven is like without your child"? I pray she didn't suffer any pain those very long five weeks while in ICU. Was she able to hold her baby after being put in ICU because of complications?

Would it be possible could one of the family members send me a picture of Esther and/or precious little baby so I can keep in my memory?

I'll be willing to send my mailing address if you tell me it's possible. I don't want to lose her memories of wonderful times learning the Spanish language. I better get off this computer and try preparing self for work and 7:00 a.m. meeting.

I love you guys and wish the Longa and Elliott family much calmness and peace with all understanding in the coming weeks and months as the baby grows up without a mother.