I didn’t expect to feel this way when they left. I expected to feel elated that they were finally gone and I could move on with my life. Kind of like you think you're going to feel when your children leave home for college, or grad school, or to start their own families. (But then it's bittersweet.)

No, I’m not talking about our dear friends, Billy and Christine Scrantom, who moved to Colorado just this week. Or even about the steady trail of Goddaughters and close friends who have gotten married and moved away, or just moved away, leaving a huge hole in my life that they once filled. Stacy moved to Nashville. Hannah moved to Pennsylvania. Julie moved to Connecticut. Katherine moved to Gulfport. Sally got married and moved to Wisconsin. And my best friend, Daphne, lives in Little Rock, but we’ve never lived in the same town, so I guess we haven’t really “parted.” It’s lonely having your soul sisters so far away and unable to be physically together on a day-to-day basis.

So, you might be asking, “who left?” Okay, I won’t keep you in suspense any

longer—it was Jesus and Mary. They’re gone. Well, their icons are gone. I just took the icons of Christ the Lifegiver and The Mother of God, Directress to their new home at Saint John Orthodox Church on Wednesday. Finally. The ones that my friend and fellow iconographer, Kerry Sneed, and I have been working on for a couple of years. If you’ve been reading my blog for a while, you already know the story of how they got “stuck” in the birth canal a while back. And then how they got unstuck.

If you missed it, you can catch up by reading a couple of older blog posts:

But the best place to read the entire story is over at the Santa Fe Writer Project’s online journal, sfwp.org, where my essay, “Blocked,” was a finalist in their 2007 literary awards. It’s a story about anger, which blocked me from being able to paint the icons for a long time. But it’s also about healing. 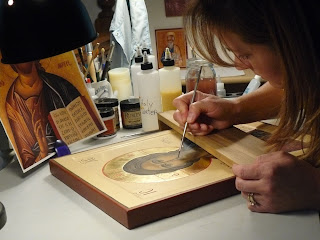 So, now when I go upstairs to my icon studio, they’re gone. I can finally clean up the studio and pack away my supplies because I’m “retiring” from iconography to write full time. That’s been the plan for a while. I’m definitely not going to teach any more workshops or do commissioned pieces, but I’ll keep enough supplies to paint a few more small icons for friends and family from time to time. But there’s a sweet sadness in the air up in that studio when I remember the students who painted their first icons there during Saturday classes, and the icons I brought to life over the past eight years there, in the Mandorla Icon Studio. 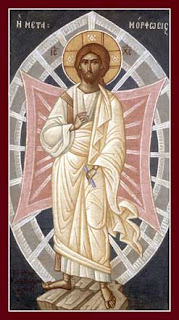 Christians used the symbol to describe the coming together of heaven and earth—as illustrated by the almond-shaped area where two circles overlap. Because of the Incarnation—because God became Man—we can paint His image and the images of His saints, using material things, sanctified by His Incarnation. And the work involved in painting those 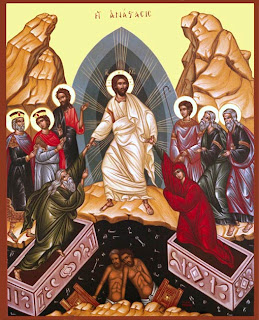 images is done in that “middle place”—in the mandorla. It’s spiritual work, like prayer and fasting and almsgiving and worship and reading the scriptures.


Mandorlas are sometimes used in icons to represent mystery, glory, or the place where God interacts with man in a mystical way, or sacred moments that transcend time and space, like in the icons of the Tranfiguration and the Resurrection.

The sign in my studio has a mandorla in it, and shows the Mother of God and my

patron saint, Mary of Egypt, together. (Mary of Egypt is unfinished, because she represents my life, which is a work in progress.) These two Marys represent opposites in many ways, and holding our opposites intact is spiritual work. (Many Orthodox Christians believe that Mary the Mother of God was without sin. Mary of Egypt fell into great sin but overcame it with years of repentance in the dessert.) 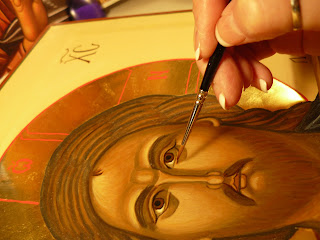 So, I’m hoping that having these two icons out of their birthing place and onto the icon stands in the front of the nave at St. John will not only bring blessings to my fellow parishioners who will venerate the icons and light candles before them, but that their absence in my studio will somehow pave the way for my writing to flourish. It’s time for me to move on. As I post this, I muse at the irony: the place where I’ll be writing is called “Word.” Maybe those guys at Microsoft are onto something. I pray that my writing will be Incarnational—that it will somehow reflect that mystical place where God touches man. Am I reaching too high? I hope not. Next to my computer I have the words to this song taped to the wall. It’s a Kris Delmhorst song, inspired by Hermann Broch’s “The Death of Virgil.” It’s called “The Drop and the Dream,” from her CD, “Strange Conversation.”

In twilight and blindness
All our work is done
We fumble and flail, we try and we fail
We only are what we almost become

It’s both our curse and our grace, here in this place
To reach for heights that we’ll never climb
And the distance between the drop and the dream
Is our one little piece of the divine

It’s a weak little flame, it’s all we got to our name
So why be ashamed to let it burn

Yes, parting is such sweet sorrow. But as I light candles in front of these icons before services this weekend, I'll be happy and humbled to see them in their new home, and I will pray, before the icon of Christ the Lifegiver:

"Lord Jesus Christ, Son of God, have mercy on me, a sinner." 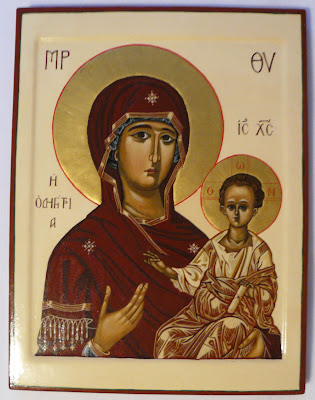 A quick note on the SFWP link to "Blocked." We're relaunching the web page and, after a few days, the new link will be: http://www.sfwp.com/archives/211