Schooled on Elvis by an English Nun

My husband and I were blessed to visit the Monastery of St. John the Baptist near 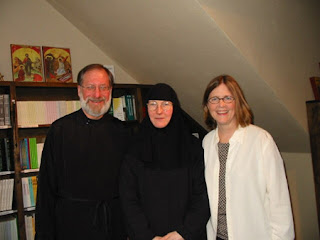 Essex, England in 2002. (Father Basil had actually been there previously, but this was my first visit.) I was especially looking forward to meeting Sister Magdalen, author of several books on children, including Children in the Church Today and Conversations With Children. Our parish in Memphis, St. John Orthodox Church, hosted Sister 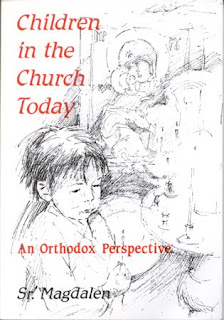 Magdalen for a series of talks in December of that same year. (That’s Sister Magdalen, with my husband, Father Basil, and me, at St. John in 2002.)

Reading Sister Magdalen’s books and hearing her talk were both blessings in my life, 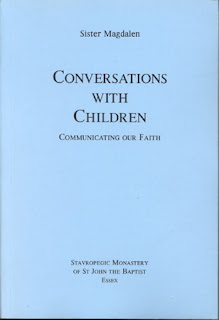 but seeing her “in action” at the monastery where she lives in England was even better. A chance encounter with her during “coffee hour” after Liturgy one morning speaks volumes to the unique way she lives her faith as she guides young souls who visit the monastery with their parents every weekend. 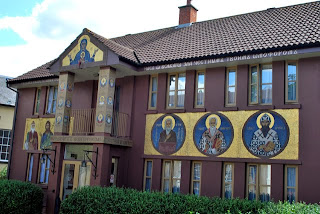 Quite a few families drive out from London and other cities and towns to worship at the monastery on Sundays and Feast Days, and Sister Magdalen leads a kind of “Sunday School” for the kids and teenagers. I won’t take time to elaborate on the wisdom she imparts here (read her books!) but only to share this encounter.

Sister brought two young boys—I’d say they were around twelve or so—up to meet my husband and I during coffee hour, introducing them and telling us that they were eager to meet the “people from Memphis.”

“Have you been to Graceland?” one of the young boys burst out immediately after asking 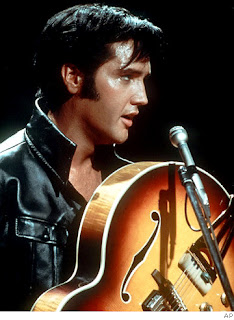 My husband laughed gently and nodded. Before he could speak, I interjected my own sinful reaction:

“We’ve only been once and that was because some visitors insisted we take them.”

Not to be put off by response, the other young boy said, “Can you get us some pictures of Elvis? Autographed, maybe? Or any other souvenirs from Graceland?”

“Why would you want them?” I blurted out. “Elvis was just a drug addict who ruined his life. Why would you hold him up as such an idol?”

Sister saw my confounded look and smiled gently before responding:

“We like to think that Elvis, like each of us, had his own demons to fight. We all have our struggles and we do the best we can. We pray for Elvis and hope that he found peace at the end of his life.” 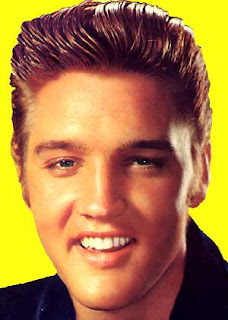 Of course I felt about two inches tall at that point and scrambled to redeem myself in front of the two eager young boys waiting for our response. Father Basil intervened:

“We’ll be happy to get some pictures for you. Can you write down your addresses?”

Sister Magdalen said to send the pictures and souvenirs to her and she’d give them to the boys. When we returned to Memphis I went out and bought pictures of Elvis and other memorabilia and mailed them to Sister Magdalen for the boys.

Every year during “Elvis Week” here in Memphis, I think about those boys, and about the lesson I learned from Sister Magdalen that day. As she wrote so wisely in her book, Conversations With Children:

“… we must do our best to avoid stifling any child’s inner freedom. We will probably make errors of judgment about attending this social event or that, about forbidding this or allowing that, about commenting on this activity or that, and so on. But we will do less harm if we courageously aim at providing filters rather than straitjackets…. Children whose home life is spiritual in an insular sense are not prepared for life. When they discover that the rest of the world—including those who ignore God—‘manages without prayer’ and ‘enjoys life more,’ they may reject spiritual values as naïve.” 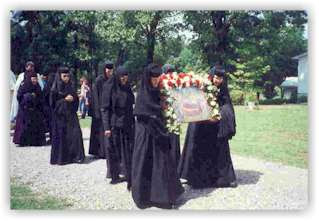 Mother of God tomorrow (and Great Vespers tonight) let us not do so in a condescending way. Before my encounter with Sister Magdalen, it used to piss me off (how Christian is that?) to see the television coverage with thousands of “pilgrims” from all over the world holding candles at Elvis’ grave the same weekend that a meager few hundred gather at the local Orthodox Churches to commemorate the Feast of the Mother of God. 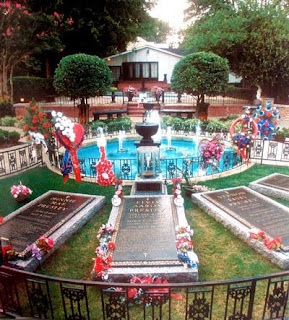 If the rest of the world in general—and Memphis in particular—wants to celebrate Elvis Presley’s death this week, I won’t begrudge them their freedom to do so. And maybe—just maybe—the next time someone comes to Memphis for a visit and asks me to take them to Graceland, I’ll be more amenable to the task. Especially if they happen to be English school boys.
Posted by Susan Cushman at 2:33 PM

I LOVE Sister Magdalen's book, "Children in the Church Today"! It helped me so much in raising my kids.

So cute about those British kids - reminded me of something else: my daughter Mary and her husband, Andrew are living in Paris right now. They go to a sweet French speaking Russian church there.

The first Sunday they visited, a young boy shyly asked them during coffee hour, "Do you know Michael Jackson?" (This was before he died). They laughed and said, "No, but we know who he is." He then proceeded to tell Andrew, "You look like him". Too cute!

I definitely had to deal with judgements when Michael Jackson died - I love Sister's kind insight and reminder of our own struggles!

Once again, I can relate. I recently did a silly facebook quiz in which I answered various questions using only Elvis songs as answers, and I felt the need to put a disclaimer at the top that basically said, "I love Elvis' music, but he's not really someone I admire or wanna emulate." A friend then reminded me that I should emulate the good in Elvis and immolate the bad, instead of dismissing the whole because of the bad.

And of course I really do hope he found peace before he died.

I recently read about St. Elvis- He was the monk who baptised St. David of Wales.

Maybe an akathist at Graceland is appropriate?

Leave it to Brandon to find an obscure reference like this one:-) I do believe Saint Elvis was from Munster, not Memphis. Nice try.