The Other Side of Civility

Thumbs, he describes a powerful element that’s present in the work of so many Southern writers, artists and musicians:

“Suzanne Hudson reminds us in blistering detail how strange people truly can be. She takes us on a stroll into that room on the other side of civility and carefully shows us ourselves.” 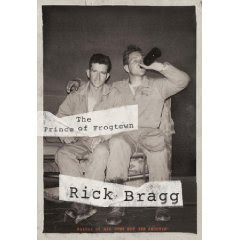 As Rick Bragg talked about during his reading from The Prince of Frogtown this past Friday night at the 10th annual Southern Writers Reading festival in Fairhope, Alabama, there’s a common thread running through much of Southern literature, and that thread is pain. Pain and suffering continue to fuel the South’s best and brightest writers, poets and artists, whether they embrace it, fight it, or try to heal it through their work. (Rick even asked lots of people who knew his dad to share good things about him, acts of mercy that infused his book with humility. You can watch him read from his book here.)

One of the weekend’s slated authors chose not to read from her book. Carolyn Jourdan chose instead to talk about her interest in doing something to make some positive changes in the world, so that there’s less of this pain and violence and suffering to write about. But most of the writers shared their stories of loss and love, pain and redemption, shining their own special light on the many facets of our broken humanity.

Check out this year’s lineup (in addition to Rick Bragg and Carolyn Jourdan): 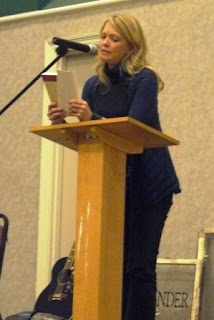 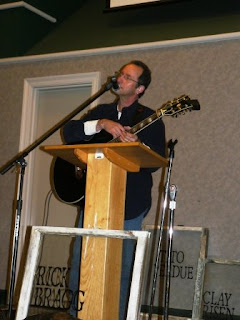 Oh, and the music! Nashville singer-songwriter and poet Tom Kimmel (left) entertained us Friday and Saturday with his music and poetry. He read from his book of poems, The Sweetest and the Meanest which I couldn’t wait to purchase, and sang songs from several of his cds …. I don’t know how to describe his music—it’s spiritual, and bluesy and folksy and country and… well, you should listen for yourself. 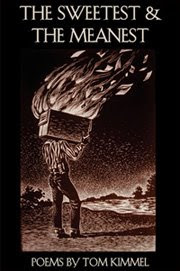 Of course the master of ceremonies, Sonny Brewer, had to be coaxed (by his agent, Caroline Carter) into reading an excerpt from his current work-in-progress. Mostly Sonny served as the magical glue for a festival known for its spontaneity and liveliness. As Shari Smith said, in her article in Thicket Magazine “King Daddy”:

“If Southern literature is rooted in family storytelling, Sonny Brewer is the patriarch, and Southern Writers Reading is the big reunion.”
This past weekend in Fairhope offered many opportunities for glimpses into both sides of civility... dinners at the Lesters’ and Jones’ lovely homes overlooking the Mobile Bay on Friday and Saturday nights were Southern genteel hospitality at its best…. I didn’t get my camera out, for fear of looking even more like the groupie I am. Both evenings were good times to visit with editors, (like Jennifer Horne, whom I met in 2006 in Memphis at the Southern Festival of Books and enjoyed visiting with again) publishers, (like Jim Gilbert at River City Publishing in Montgomery and Joe Taylor from Livingston Press ) agents (like Caroline Carter) , writers, and the wonderful literary patrons of Fairhope who worked so hard to put on the event this year. Thanks so much to Martin and Mona and Skip and Nancy and everyone else who helped! 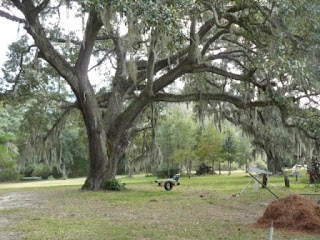 n Sunday morning, Doug, Herman and I were invited to a wonderful brunch hosted by Suzanne Hudson and Joe Formichella at the “Waterhole Branch Arts Commune” just outside Fairhope. The property is draped in Spanish moss… 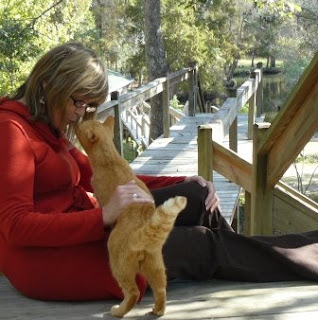 morning sun… or a kiss from me! 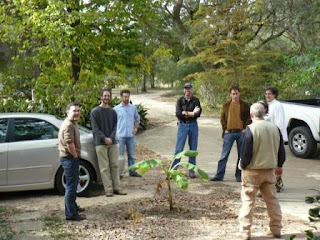 Sonny arrived just as this group of young writers was leaving…


And was welcomed by Suzanne and Joe… 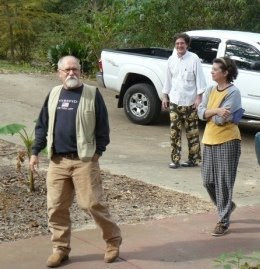 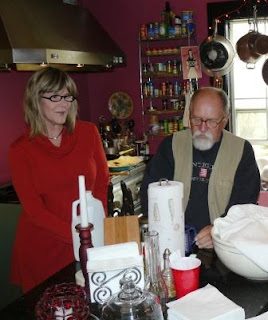 And joined us in the kitchen for cheese grits, biscuits and gumbo.

Later we ambled next door to visit Everett Capps, “Mayor of Waterhole Branch” and author of Off Magazine Street, the book which was adapted for the 2004 movie, “A Love Song for Bobby Long” starring John Travolta and Scarlett Johansson. 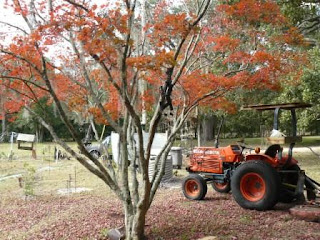 We were told we should see Everett’s house and surroundings…. an eclectic mix of art and “toys”…
His front porch is interesting... 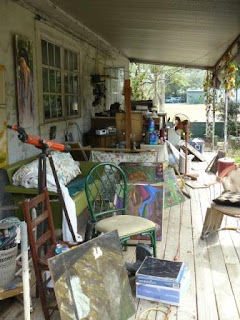 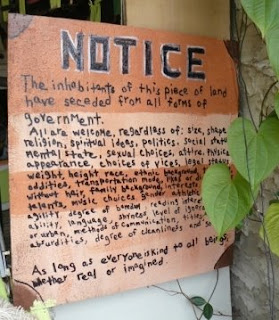 and the sign welcoming visitors
And then there's this swinging horse on his back porch, which I fell off of while trying to get the hang of it. Yeah… I know…. 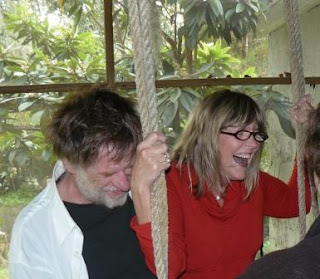 Finally I figured it out, with help from the Mayor, of course. 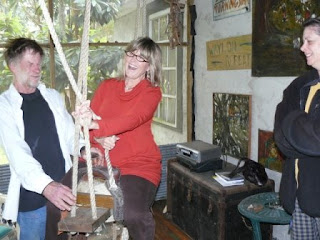 All in all a magical weekend… 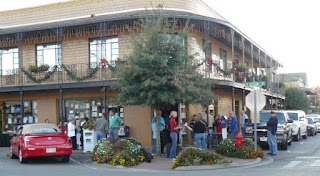 Loved shopping at Page and Palette--Fairhope's wonderful independent bookstore... and enjoying the music outside the store on Sunday afternoon. [Note: When I was choosing a name for my blog back in August of 2007, I discovered Page and Palette, and settled for Pen and Palette for my blog.]
And love the street scene with the lights, which were lit just as we arrived in Fairhope last 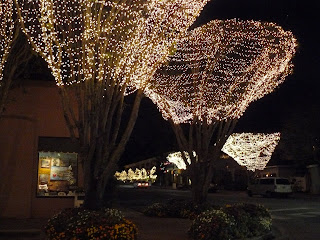 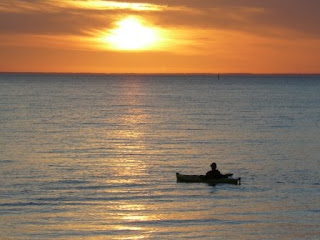 I’ll close with a few photos of sunset on the Mobile Bay at the Fairhope Pier on Sunday night.


As I watched the gulls flying south and the lone kayaker coming from up the bay, I thought 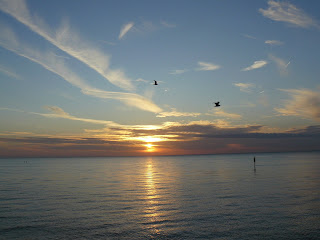 about my childhood summers at the neighboring town of Daphne, Alabama…. and I promised myself not to wait another forty years to visit again. I hope to be back next year! 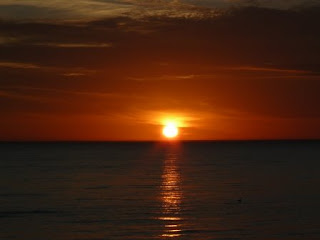 Posted by Susan Cushman at 7:45 PM