The End of Faith, Chapter 2, or Why I Didn't Get to Sleep at All Last Night

An old 70s song by the Fifth Dimension comes to mind as I begin my blog post today. You can listen to it here.

At 2 a.m. I was still tossing and turning. Well, with this heavy cast on my left foot, it’s more like scrunching and tugging and lifting. Ugh. But I’ve been sleeping with a cast on my foot for almost three weeks now, and this was my first near sleepless night. So… I’m thinking it was my mind and not my foot that was the culprit. When I was a little girl, I had to take tranquilizers to sleep at night for a while. (Yes, in the 50s.) And the doctor told my parents not to let me "watch TV or read anything stimulating for an hour before going to bed.” Even in grade school and junior high, I would lose the “off” button for my brain and end up sleepless in Mississippi, or worst, sleep-walking… even out of the house and down the street.

Yep. My pre-sleep ritual last night consisted of, you guessed it, reading Chapter 2 of Sam Harris’ book, The End of Faith. Disturbing stuff, if you take him seriously. And evidently thousands of people took him seriously enough to buy the book, making it a Best Seller. And even when lots of folks wrote letters to him, protesting his book, he answered with a second book, Letter to a Christian Nation. He’s on a roll. Usually I wouldn’t care. Wouldn’t even read the book. But as I said in my last post, there’s this friend I love very much who asked me to read the book.

Thanks so much to everyone who commented on my post about Chapter 1. And 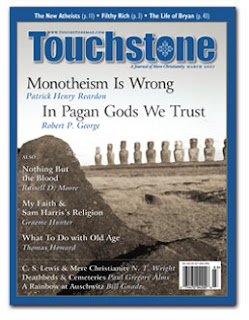 thanks to my friend, Josh, who shared the March 2007 issue of Touchstone Magazine with me, which has an article about Harris’ book by Graeme Hunter, philosophy professor at the University of Ottawa and author of Radical Protestantism in Spinoza’s Thought. I wish I could link to the article through Touchstone’s online archives, but it isn’t one the articles set up by them for linking to. So, I’ll share a few quotes here. The article is titled, “Faith of the Faithless: Why Sam Harris Can’t Stamp Out My Religion with His Own.” (If you want to read the article, send me an email and I’ll send you a photocopy.)

Harris makes a few interesting points, but I should confess to finding his book to be one of stupefying banality. To have come to such a globally negative judgment about a book is normally reason never to mention it in public, but I make an exception in this case because it has appealed to so many thousands of readers and so many learned reviewers in respected journals.

Hunter gives a glimpse into the later chapters of the book here:

It is not surprising that Harris gives few details about his plan for ridding the world of faith. He confines himself to a few words near the conclusion of his book. “It is a matter,” he writes, “of finding approaches to ethics and to spiritual experience that make no appeal to faith and broadcasting this knowledge to everyone.”

One great weakness of The End of Faith is that Harris does not prove that the dangers posted by religion are any different from those posed by the police, doctors, or government—or aggressive atheists, for that matter—or that its benefits are not worth the risk in the way theirs are. He does not show why it is not sufficient that we scrutinize religious claims and reject them when they are false. Instead, he takes for granted that religions are always dangerous, and always wrong, and therefore that we would be far better off repressing them.

So… on to my brief quiver of quotes and comments on Chapter 2: The Nature of Belief

Right off the bat Harris tries to take away our freedom:

Believing a given proposition is a matter of believing that it faithfully represents some state of the world, and this fact yields some immediate insights into the standards by which our beliefs should function. In particular, it reveals why we cannot help but value evidence and demand that propositions about the world logically cohere. These constraints apply equally to matters of religion. “Freedom of belief” (in anything but the legal sense) is a myth. We will see that we are no more free to believe whatever we want about God than we are free to mean whatever we want when using words like “poison” or “north” or “zero.”

This coherence seems to be a theme in this chapter, as he tries to explain everything in terms of rational rights and wrongs, by his definition:

Belief, in the epistemic sense—that is, belief that aims at representing our knowledge about the world—requires that we believe a given proposition to be true, not merely that we wish it were true…. Here we can see why Pascal’s wager, Kierkegaard’s leap of faith, and other epistemological ponzi schemes won’t do. To believe that God exists is to believe that I stand in some relation to his existence such that his existence is itself the reason for my belief. There must be some causal connection, or an appearance thereof, between the fact in question and my acceptance of it. In this way, we can see that religious beliefs, to be beliefs about the way the world is, must be as evidentiary in spirit as any other.

Unless I misunderstand him here (and that’s quite possible, as this stuff is way over my head) I have to say I agree with some of what he says here. God’s existence is itself the reason for my belief. But I have no idea what he means by “evidentiary in spirit.” I welcome enlightenment here from my readers!

It should be clear that if a person believes in God because he has had certain spiritual experiences, or because the Bible makes so much sense, or because he trusts the authority of the church, he is playing the same game of justification that we all play when claiming to know the most ordinary facts. This is probably a conclusion that many religious believers will want to resist; but resistance is not only futile but incoherent. There is simply no other logical space for our beliefs about the world to occupy.

Resistance to his opinion is incoherent?

Later in the chapter, it’s interesting that he quotes Hebrews 11:1, which I would quote to him:

“Faith as the assurance of things hoped for; the conviction of things not seen.”

But then he says, of this passage:

Read in the right way [Harris’ way?—my comment] this passage seems to render faith entirely self-justifying: perhaps the very fact that one believes in something which has not yet come to pass (“things hoped for”) or for which one has no evidence (“things not seen”) constitutes evidence for its actuality (“assurance”). Let’s see how this works: I feel a certain, rather thrilling “conviction” that Nicole Kidman is in love with me. As we have never met, my feeling is my only evidence of her infatuation. I reason thus: my feelings suggest that Nicole and I must have a special, even metaphysical, connection—otherwise, how could I have this feeling in the first place? I decide to set up camp outside her house to make the necessary introductions; clearly this sort of faith is a tricky business.

Here Harris is equating belief with feeling. This is not the Christian definition of belief or faith, but something he has come up with himself.

Harris’ section on “Faith and Madness” might be what disturbed my sleep the most last night. A sample:

It takes a certain kind of person to believe what no one else believes. To be ruled by ideas for which you have no evidence (and which therefore cannot be justified in conversation with other human beings) is generally a sign that something is seriously wrong with your mind. Clearly, there is sanity in numbers. And yet, it is merely an accident of history that it is considered normal in our society to believe that the Creator of the universe can hear your thoughts, while it is demonstrative of mental illness to believe that he is communicating with you by having the rain tap in Morse code on your bedroom window. And so, while religious people are not generally mad, their core beliefs absolutely are. This is not surprising, sine most religions have merely canonized a few products of ancient ignorance and derangement and passed them down to us as though they were primordial truths. This leaves billions of us believing what no sane person could believe on his own. In fact, it is difficult to imagine a set of beliefs more suggestive of mental illness than those that lie at the heart of many of our religious traditions.

So, he ends Chapter 2 by declaring that people of faith are mentally ill. Again I ask, who made Harris the expert on mental health? Who appointed him to set the standard? And perhaps more importantly, why are thousands of people excited about what he has to say?

When I couldn’t sleep last night, I read two other articles in the March 2007 issue of Touchstone, looking for something to calm my disturbed spirit. The first was by a favorite writer of mine, Thomas Howard. But he was writing a soul-searching article about approaching old age, learning detachment, caring less about the world’s pleasures and comforts… things that yes, I want and need to learn and have read much from the Orthodox Church Fathers about, but … somehow his words didn’t quench the disturbance created by Harris in my mind.

It was another article in the same issue, “Simply Lewis,” about C. S. Lewis’ classic book, Mere Christianity¸ that helped. Like these words, from a section of the article (by N. T. Wright, Anglican Bishop of Durham, England) on “Faith and Truth”:

And speaking of sleep… I’m going to find me a good Southern fiction novel to read tonight! And I promise my next post will be about something entirely different... I need a break from Harris! But please leave your comments!
Posted by Susan Cushman at 5:55 PM

Don't let Sam get you down. Darkness it is. He just hasn't met the Light -- yet.
Have you read "The Widow of the South"? You might not be able to sleep, but it will certainly make you happy. I LOVED it.
Terry Bernardini