American Among Americans: A Romanian priest serving a Greek parish in a small town in Florida bridges the cultural gap 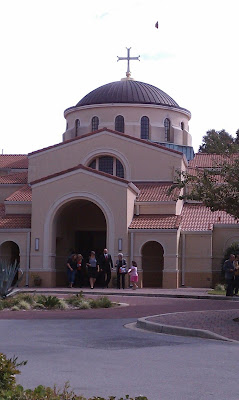 I’ve been stewing on this post for a couple of months. Yesterday morning I had an experience that prompted me to finally address some issues I’ve been circling. I went to Saints Markella and Demetrios Greek Orthodox Church in Mary Esther, Florida, for Divine Liturgy on Sunday morning.

It was a 45-minute drive from my writing “retreat” in Seagrove Beach, but well worth it. Not only is the chapel beautiful (not sure when it was built, but the architecture is very traditional, both in an Orthodox sense and in consideration for its location, in the panhandle of Florida), and the white walls are eagerly awaiting an iconographer’s touch to fill the nave with spiritual windows to heaven. (The physical windows in the dome let in just the right amount of light.) Only the Platytera has been installed, and it is a beautiful icon.

The small chapel was nearly full of parishioners for the Sunday morning service when I arrived (5 minutes late) and I observed the cultural mix one might expect: Greek, Ethiopian, and others whose unknown ethnic origins surfaced during the Lord’s Prayer, when the priest gave parishioners the opportunity to recite the prayer in their native tongues. Touching, but not over done.

What do I mean by that? Well, this is America, and English is our native tongue. And yet many Orthodox churches in this country still use a great deal of Greek, Arabic and other languages in their services—something that can be a bit off-putting to Americans visiting one of these churches, or even to members who only speak English. It disrupts the flow of the prayers for me when other languages are thrown into the service. Call me ignorant. Call me an American snob. But again, this is America.

So, at the Greek Orthodox church on Sunday morning, I expected to hear much Greek throughout the service, especially in the music. I was pleasantly surprised that almost all the music and Liturgy were done in English, even though the priest struggled to make his words clear through his strong Romanian accent. Father Gabriel served at Saint Nicholas Cathedral in Baia-Mare, Romania, originally, and he has also served in OCA (Orthodox Church in America) and Romanian parishes in this country prior to coming to this Greek parish in Florida. He even apologized before the homily (sermon) saying that sometimes he is difficult to understand, but he would try. His humility and joy were evident, and if I missed a few words or phrases due to his accent, they were insignificant compared to what I would have missed had he been speaking another language during much of the Liturgy.

At the end of the service, as we were going forward to receive the priest’s blessing, I overheard this conversation between two young men in line behind me:

“I can’t believe the Nativity Fast begins in a week.”

“What do you mean, you don’t keep that one?”

“Well, I keep the Wednesday and Friday fasts, and Great Lent, and that seems like a lot. This one is just too much. Maybe it would be good for me, but it feels counter to our culture.”

Counter to our culture. Yes. As do the head coverings and peasant-looking clothes worn by American converts in many Orthodox churches in America, not to mention the extra-long services which sometimes seem more appropriate for monastics than lay people.

Those of you who have known me for a long time know that I bought into all of those traditions with my very soul at one point, about 20 years ago. I was that woman doing prostrations when everyone else was just making metanias. I was that woman with the head-covering when only a few others in a parish of 300 people wore them. I was that woman who drove her children crazy by demanding they go to church every time the doors were open (which at our parish was every day). I was that woman who skewed television and secular reading for about five years, immersing myself only in spiritual reading and prayer. Although there were very many things about those activities which may have strengthened me spiritually at the time, there was nothing moderate about my life then, and I’ve been struggling to recover my balance ever since. 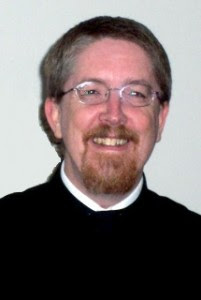 A few weeks ago a friend sent me a link to an article by Father Johannes Jacobse (right) of the OCA called “Barbarians Among Us?” While there is much in this lengthy piece that I won’t address here (and don’t necessarily agree with in its entirety) there are some good points I’d like to share. Especially about the church being culturally relevant. Father Johannes talks about how many Orthodox churches in this country have rejected the foundations of Western Christian culture in lieu of trying instead to create a Church that is “divorced from the surrounding culture.”

In the final section of his post, “Bad Money Drives Out Good,” he says, “… the challenge for the Orthodox Church is to become American among Americans, and –- in our own particular way — Western among Western Christians.” He points to important issues such as “serving Liturgy in the spoken language of the marketplace” and “learning to faithfully express the meaning of the Gospel in the cultural life of our country.”

He says that we haven’t learned to “discern and nurture what is best in Western culture. Our failure to do this, and more importantly, our apparent unwillingness to do this, has not resulted in a stronger Church here in America but rather one that looks increasingly like an Eastern-rite Mainline Protestant denomination.”

I thought about those words when Father Gabriel gave his homily on Sunday morning. He preached on both the Gospel reading for the day (Luke 8:41-56) and also the Epistle (Galatians 2:16-20.) When speaking of the passage from Galatians, about how man is not justified by works of the law, but by faith, he talked about the two extremes that Christians often fall into: legalism and ignoring the law altogether. I remembered those words when I overheard the conversation between the two young men about the fasts set by the Orthodox Church. I think the man who doesn’t keep the Nativity Fast has probably struggled with it, spiritually, but has come to a place of balance with this spiritual practice in his own life. He didn’t appear to be flippant, as he stood, prayed, and sang diligently throughout the service. I was tempted to stay for coffee hour and seek him out, but I was eager to return to my writing retreat, and so I left after taking the priest’s blessing at the end. As I kissed the cross Father Gabriel held out to me—and also his hand—I felt genuine warmth coming from his eyes and his infectuous smile as he said in his strong Romanian accent, “Thank you for visiting with us today!”

Father Johannes closes his article with this challenge for Orthodox Christians in America: “… just as Jesus was the authentic Jew among Jews, the Church has been – in turn – authentically Greek among the Greeks, and authentically Russian among the Russians, so too we must be authentically American among the Americans.”

love it su and I was the friend who sent the article! i love what you have done with your thoughts

Hi Susan, just finding your blog. I'm in the throes of conversion to Orthodoxy and this was a great help today! Hope to meet in person one day. I think we might have some shared friendships.
-angela

A fine, fine, read, Susan, and one that I enjoyed on many levels. Thank you (again) for articulating and sharing your thoughts.

Thanks so much, Daphne, for sharing the link (and so much that matters in life) with me. And to Angela: so glad you found my blog and may God bless your spiritual journey. David: your comment means a lot. Thanks for reading and commenting.