At 2:45 p.m. today I finished reading Pat Conroy’s long-awaited new novel, South of Broad. I could have finished it earlier… last week, even. But I wanted to sip it slowly, like a glass of cognac. I didn’t want it to be over too quickly, but I also thirsted after the pleasure—and the pain—each word, each page, each chapter, would bring. And I was not disappointed.

I’m not going to say it’s as good as The Prince of Tides—my favorite novel. There’s really no reason to

compare, but I guess it’s difficult not to. But I definitely could related to SOB (I’m thinking it’s not a coincidence that the novel’s title is reduced to such an abbreviation) better than Tides. Maybe it’s because the group of friends in the center of the drama were about my age…. they were seniors in 1969, the year I graduated from high school.

It’s no secret that Conroy reaches again and again into family history to fuel his fiction. Someone once said he built a cottage industry out of fictionalizing his dysfunctional past. So be it—he does it well. Half way through the book, one of the lead characters and one of Charleston’s elite, says it well, when asked, “Why do we drink so much in Charleston?”

Even the monsignor, whose truth isn’t revealed until the final pages of the book, says, early in the novel, “It is the martini’s job to bring me closer to God…. It brings me halfway to God, then I must rely on the awesome power of prayer to take me to the summit.”

I loved the monsignor for his humanness…. Right up until page 500, when even his broken humanness is more than I can bear. But when Leo, the protagonist and hero of the story learns the ugly truth about what this Catholic priest did to his brother, he “cures himself” with Charleston, believing that “there’s nothing that the Holy City cannot right.” Reflecting back on the nightmare that was his life—and the life of his circle of friends—including their hellish survival of hurricane Hugo, he is able to say,or rather write, as he is a columnist for the newspaper:

“We have been touched by the fury of storms and the wrath of an angry, implacable God. But that is what it means to be human, born to nakedness and tenderness and nightmare in the eggshell fragility of mortality and flesh…. I am standing with my best friends in the world in complete awe at the loveliness of the South.”

It struck me, as I read these words, that I might have survived my own childhood in the South better had I clung to a circle of friends who had weathered the same storms. I was reminded of this at my 40th high school reunion a few weeks ago, in Jackson, Mississippi. Classmates who have remained close seem to have come through the storm a little more intact. I’ve been gradually reconnecting with some of those friends this summer, and it feels like soothing ointment on an open wound.

Starla is probably the most wounded character in the book. Our hero, Leo “the Toad” tries to save her, by marrying her. Years later, a shrink in Miami would tell him that his wife has borderline personality disorder. He asked what that meant.

Leo loved Starla when they were young, but later learned to survive only through detachment. What else can he do, when his wife tells him, “I like shit better than ice cream. Breakdown better than the Rotary Club. I like the darkness…. I trust it.”

If I’m painting a darker picture than I mean to, it’s because the dark images in the book are so powerful. And I’m a little bit like Starla—sometimes I’m drawn to the darkness. As Leo begins to write his final newspaper column which will reveal these dark truths, he starts with the words, “Family is a contact sport.” But there are also beautiful, light, soft images throughout—just as there are in the equally graphic Prince of Tides—crafted with that magical gift of literary fiction that Conroy has. Overwhelmed by despair over the horrific truths that Leo discovers about the events that led up to his brothers suicide, he checks into the psychiatric ward of a hospital, and records his drug-induced dreams with a tender, redemptive voice.

Just before Leo’s release from the hospital, he writes in his journal:

“I have started writing about a boy nicknamed the Toad, whose life unexpectedly begins on Bloomsday in the summer of 1969, when a moving van parks in the driveway across the street, I find two orphans handcuffed to their chairs, and I learn that my mother had been a nun…. I meet the main characters who will take a leading part in the dance, the great arching motion of my life.” 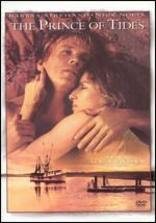 And what a dance it is. Now I’m hoping for a movie. Nick Nolte made such a perfect Tom Wingo in the movie, “The Prince of Tides.” And I loved Maggie Collier as his mother. Who would I cast in the lead roles for South of Broad? Hmmmm, a few ideas:

Actually, this will take too long… the main characters are teenagers when the book opens and close to 40 at the end. Will take some brilliant casting….
Posted by Susan Cushman at 3:54 PM