Once You Know Where True Is

I started to name this blog post “Manic in Memphis.” I was looking for something catchy like “Sleepless in Seattle” and didn’t want to spend an hour on the title for my blog post. The deal is, I couldn’t sleep at all on Tuesday night. Went to bed at 11:30 or so… tossed and turned until 1:45 a.m. Got up and went to the den, lit the fire, and sat on the couch reading until about 4. Tried to write. Tried to pray. Cried a little bit. And finally just sat still. Fighting back thoughts. Have you ever tried to not think? Poured a glass of sherry at 3. Another at 4. Finally crawled back into bed at 6:15, just before my husband’s alarm would be going off for the day. Maybe I slept a little on and off between 6:30 and 9:00 a.m., when I finally got back up for the day.

Insomnia is an old friend. I took tranquilizers when I was a child. To sleep. Mom called them my “worry pills.” When I was in my twenties I had trouble sleeping. Another wave of it hit me in my early 40s. But I’ve had a good decade and a half of sound sleep. So when it visited me again Tuesday night, I was miffed. A fluke, I thought. Until it happened again on Thursday night.
This time I went out into the den around 1:30, I grabbed a book and a blanket and sat in my chair reading. Then I closed the book and closed my eyes and just sat. Staring at the fire and Oreo (my cat) and my undecorated mantle and room empty of a Christmas tree. My eyes searched for a visual snack and at last found our Christmas card “tree” on the kitchen counter, filled with cards and photos of friends. And then it hit me. I was anxious.

It was less than two weeks before Christmas and I had so much to do. My three grown children would be coming home in shifts, starting today … and the final exits would be January 4. Other relatives would be visiting after Christmas. Somewhere into the mix there would be a trip to Jackson, Mississippi to visit my mom in her assisted living home. She doesn’t like to leave it any more.

A couple of years ago I went to a Twelve-Step program three times a week, for about six months. I remember when it got close to holidays, especially Christmas, everyone would start getting nervous. People shared their coping mechanisms. Some left town. One woman hung a sign up on her front door for visiting family members: “Check your baggage here before entering.” They talked about having "boundaries" so they could survive. They passed around a “hot line” of phone numbers to call when people needed help. All this to survive Christmas. Not to celebrate it.
I talked with a friend about the anxiety. And with my husband. They both helped me figure out that I was buying into the old lie that I’ve believed most of my life, that what I do defines who I am. So if I “do” Christmas (or whatever) perfectly I am a good person. A good wife. A good mother. A good friend. A good hostess. A good daughter. Of course no one can “do” Christmas (or anything else) perfectly. But we can “be.” Be authentic, that is.

I’ve been reading some creative nonfiction essays and books and articles, and

also a novel, Blue Shoe, by Anne Lamott. Her memoirs are amazing, so I decided to try one of her novels. Part of my journey to figure out what I really want to write (fiction or nonfiction). But the novel, Blue Shoe, has wisdom in it. The way fiction can

contain truth, can show it, in a universal way. Like Arlo and Janis, you know?

Mattie, the protagonist in the book, is a lot like me. She’s a mess. She’s trying to take care of so many people, including her mother, who’s getting dementia and she has to move her to “Personal Care” from her independent living apartment. She describes those struggles with amazing clarity. She learns to love herself and others as they are when everything seems to be falling apart. She lets herself be human. She sees the beauty in the brokenness.

For example, at one point her friend Daniel who is a construction worker, is helping her make some repairs, starting with building a new fence for her yard. He teaches her children, Harry and Ella, how to use a level to get the posts straight. He says, “Now that we know these posts are level and true, everything can be measured from them. Once you know where true is, it defines everything else that has to happen.”

Once you know where true is. There’s the rub. Finding true. I wish it was as easy as using a level. But often it involves more than that. It involves sitting still and listening. It involves suffering. It involves clearing the rubbish to get to the good stuff. It involves letting things be what they are, and more importantly, letting people be who they. And being authentic with each of them. 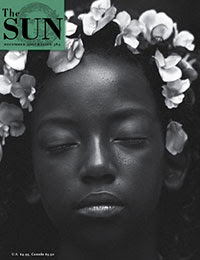 in an editorial in the December issue:

So, how do I keep my passion alive?

By allowing hope to rise in me; that’s the nature of hope….

By reminding myself regularly of The Sun’s motto: “What is to give light must endure burning.” I doubt that those words would mean much to me if they’d been written by a young poet who’d just returned from a weekend vision quest. But they were written by Viktor Frankl, an Austrian psychiatrist who, with his wife and parents, was deported to a Nazi concentration camp in 1942. As Frankl was transferred from camp to camp, his wife, his father, his mother, and virtually everyone else in his immediate family were killed by the Nazis. The suffering he experienced and witnessed taught him that even in his most painful and dehumanizing situations, life has meaning, and therefore even suffering is meaningful.

I knew that. That suffering is meaningful. I’ve learned it over and over through the years. But I still do everything possible in life to avoid suffering. To avoid unpleasant interactions with people. To avoid painful self-knowledge. But all these “activities” sometimes come back to bite me in the butt… this time, in the form of insomnia.

Yesterday I went to lunch with my husband and told him some of what I was thinking about all of this. He doesn’t get anxious. Ever. And he always uses a level. Even to hang a picture. Yes. Always. Every time we move, I quickly hang up all the pictures while he's at work because I can't stand to do it his way. With a level. It's so slow. So, at one point I told him about a quote from Blue Shoe where Mattie tells Daniel something her therapist has told her:

You should go only as fast as the slowest part of you could go.

I looked at my husband of thirty-seven years and said, “You know, I do the opposite of that. I go as fast as the fastest part of me can go. And then I end up dragging the slower parts of me behind like tin cans tied to the back of the get-away car at our wedding.”

He smiled across the table, laughed gently (baby blues eyes twinkling) and said, “and the rest of us, too.”

We both laughed and then I thought, catch me if you can.

Mattie gets like this, in the book. I love this part:

Mattie sat at the table, obsessing, orbiting around herself. She was sick of her worried, hostile mind. It would have killed her a long time before, she felt, if it hadn’t needed the transportation.

That’s probably how my mind feels about me sometimes. It’s just along for the ride. Or how my soul feels about the way I treat its home… my body. I don’t give it enough rest. Or exercise. Or healthy foods. So, my mind and my soul are both crying out and saying slow down! Wait for us!

I slept really good last night. When I woke up the phone was ringing. It was Jonathan, our 30-year-old. He’s driving home from upstate New York to spend two and a half weeks with us before his deployment to Iraq. He’s driving through the snow and ice storm. By 8 a.m. he had made it just south of Cincinatti and was calling in a blinding blizzard to ask us to look at the Weather Channel online and see what he should expect. He had another 100 miles or so of bad stuff before making it into central Kentucky. Then he’d have mainly rain the rest of the way. We’ve talked with him several times this morning. Once, when he was going only 30 mph, a woman passed him going about 60. He was tempted. (Jon and I both hate to drive slow.) But he made himself go slow. A little while later he passed the same woman. She was off the highway in a ditch. A lesson in what he already knew, to only go as fast as the slowest part of you can go. In this case, his tires on the ice.

Thank you, God, for helping him know this. Please bring him home safely. And please help me be level and true when he gets here. Maybe he’ll help me decorate the house for Christmas. If I can only slow down enough to let him catch up with me.
Posted by Susan Cushman at 10:44 AM

I think your writing is one very healthy thing you do. A good friend started a blog recently and I know you'll love it. Today's post speaks of suffering in a way you've written about before. www.lisafran.wordpress.com