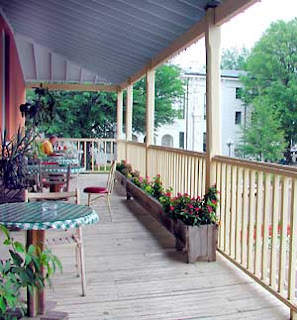 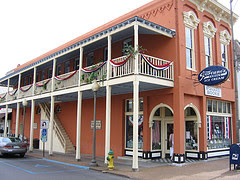 Square Books in Oxford, Mississippi yesterday… with a cool fall breeze blowing and Will (the cute Ole Miss law student working upstairs that day--can't link to Will 'cause I didn't get his contact info:-) bringing us lattes and cappuccinos from the coffee bar inside…

Sounds like the setting for a good Southern novel, doesn’t it? Or maybe just the inspiration we needed for the first meeting of the Yoknapatawpha Writers Group, a spin-off from the Yoktapatawpha Summer Writer’s Workshop held in Oxford in June. By the way, “Yoknapatawpha” is a native American word meaning “slow water traveling through fertile land.” William Faulkner used it as the name for the fictitious county that was the setting for much of his writing. We’re not borrowing it from Mr. Bill… we’re borrowing it from the Indians. We think it’s quite appropriate for a group of Southern writers.
Several of us have been keeping in touch by email, sharing writing samples to critique, info about upcoming conferences, good literary publications, contests, etc. It was Doug McLain who finally said, “Let’s get together.” Doug is still working on our web site, which is up but still very much in progress. We agreed on a date (September 15) and place (balcony of Square Books in Oxford, thank you Richard Howorth!) for our first meeting, and deadline to send writing samples in for group critiques. Five folks participated this first go-round (left to right in group photo): 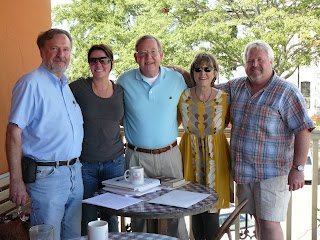 Others were invited and hope to join us in the future. 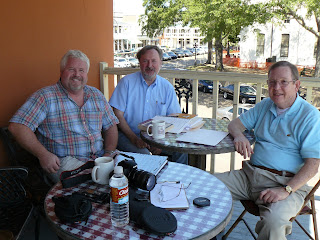 We started with discussions of what we want to be and what we don’t want to be. We want to be a critique group, not an actual guild (like the Mississippi Writers Guild) which organizes conferences and the like. We want to be humble and friendly, not competitive. As Joshilyn Jackson shared at the Mississippi Writers Guild Conference in August, “No no one breaks out of the pack.” The whole pack shares each other’s successes and struggles and journeys. A good critique group is honest, but also supportive.
As we critiqued Doug’s short story, “Shadetree Mechanics” a 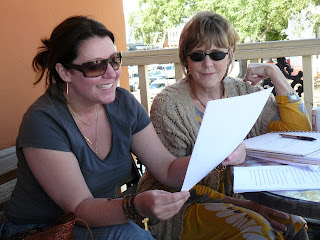 nd the first chapter of Herman’s book, Bon Sequour, and part of a chapter of Tom’s book, War of the Doves, and Susan’s short story, “There is a Balm,” we handled each other’s treasures gently, but wisely, offering praise for the parts that aroused our emotions and imaginations and suggestions for the parts that didn’t work as well. We discussed Patti’s three-book project and told stories of our shared Southern upbringings which offer such fertile fodder for fiction (yes, that was intentional… weak, but intentional) … or for creative non-fiction.

Our final two meetings for 2007 are scheduled for October 27 and December 1, both in Oxford. If the weather is too chilly for the balcony at Square Books, we’ll find an indoor spot and let everyone know. 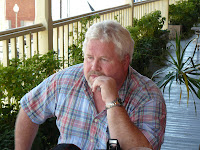 Thanks so much to Doug (in deep thought, at left) for getting this started! And… you M&M (Mississippi & Memphis) writers who missed this first one, we hope to see you at the second meeting! Be sure and send your writing sample to Doug McLain at asecondwind@comcast.net if you’d like the group to critique it. You can also bring short samples for spontaneous reading if we have time. Or just come and listen, comment, inspire, and get inspired! We get started around 10 am, take a lunch break at some point--City Grocery this time-- and stop around 4 pm. Oh, and we wound down at the end of the day with a mojito or mar

garita or beer on another balcony - the one at City Grocery, just around the corner from Square Books, which is a great place to have a drink, so long as you don't need to use the restroom.
I’ll close with the quote that was on my coffee mug at Square Books yesterday:

istory of the world, but then you read. It was books that taught me that the things that tormented me were the very things that connected me with all the people who are alive, or who have ever been alive. – James Baldwin
Posted by Susan Cushman at 2:42 PM

Hi Susan -- What a great blog. I came across it totally by chance, just looking for art-oriented blogs in Google. I edit LiturgicalCredo.com, which looks at today's books, arts, poems, and ideas through the view of liturgical tradition (broadly) and sacramental faith (broadly). By "broadly" I just mean Roman Catholic, Eastern Orthodox, Anglican, and some Lutheran perspectives. The site is an e-publication and a member of the Council of Literary Magazines and Presses. If you've got writing or JPEGs of art work you'd like to be considered for publication, email me at colin@liturgicalcredo.com. The homepage is www.liturgicalcredo.com. And please tell your writer/artist friends.
cheers,
Colin Burch