The Other Woman in Mom Writers Literary Magazine

Last winter I wrote an essay, titled it “The Other Woman,” and began to search for a publishing home for it. Ironically (you’ll get this when you read the essay) it was rejected by five publications before I discovered a good home for it.

Mom Writer’s Literary Magazine is available both in print and online. I found it when I noticed it in the credits of another writer whose essay was published in skirt! Magazine, so I decided to give it a try. What I discovered was more than a good fit. I discovered a good magazine.

The Summer 2008 issue was impressive, and included poetry by Beth Ann Fennelly and an interview with actress Janine Turner. I posted about the issue about a month ago, here, when I got the news that they had accepted my essay for publication. 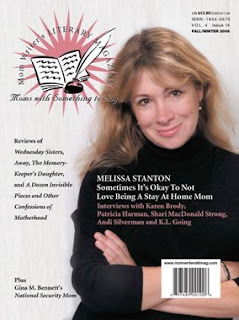 When the Winter 2008 issue of Mom Writers Literary Magazine (right) arrived in my mailbox today, I found my essay on page 32, but when I clicked on the link to it in the contents on the home page, I found that only the beginning of the essay is available, unless you subscribe to the magazine, which you can do here.

So, I scanned the essay so those of you without subscriptions can read the "published version" here on my blog. I hope that you can click on each page and it will enlarge so you can read it. (I'm experimenting here.) If it doesn't work, I'll just print the essay within the text of the post, but here goes: 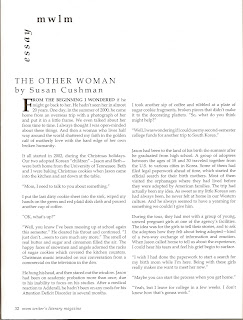 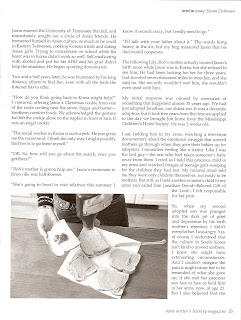 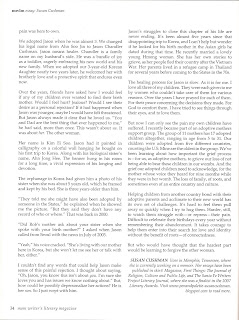 Later I gobbled up the great essays, poetry and features immediately. I especially liked Lee 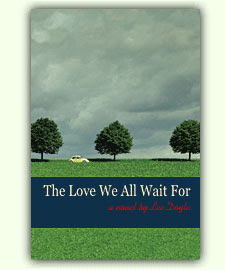 Doyle’s essay, “Letting Go of My First-Born,” which of course I thought would be about her child, but it was actually about her first published book, which, as all writers know, is like a child. Her first novel, The Love We All Wait For, was published in September, won "Best Novel" at the 2006 East of Eden Writers Conference and was a finalist in the National Best Books 2008 Awards, sponsored by USA Book News. She’s already at work on her second novel, The Sweet Mundane.
Mom Writer’s Literary Magazine also has great book reviews in each issue, as well as poetry. It was picked by Writer’s Digest Magazine as one of the 101 Best Web sites for Writers in 2006, 2007 and 2008. So… all you moms who are writers, or “just moms” (which we all know is enough!) or “just writers”—I highly recommend this magazine.

Okay, for my writing friends (or “just friends,” which is also enough!) who are curious about who rejected the essay, here’s the list: Redbook Magazine, The New York Times Magazine, Narrative Magazine, LiteraryMama.com, and Real Simple Magazine. I guess they’ve got bigger fish to fry. Or at least that’s what they think.

As always, thanks for reading, and please leave a comment!
Posted by Susan Cushman at 8:20 PM

peaceful perspective in the poignancy... what were redbook et al thinking when they missed this?!

Thanks, Sarah. I'm happy with the home the essay found at last... it seems like a good fit. But about once every month or two I shoot something off to the New York Times Magazine for their back page, "Lives." I figure it's good practice, and it keeps me humble.

I love this. I never thought of the trial and tribulations american parents might have adopting children from other countries.

I love this! What a beautiful thing! Adoption is the most loving option I can imagine choosing for a child in need, whether it be the decision to adopt a child or to make an adoption plan for your own flesh and blood when you know that you just can't provide what they need. I would love for all stigmas and negativity around adoption to disappear, maybe one day it will!

Excellent story. I follow your son's blog, and always worry about his sad posts. As an adoptive mom of a child, that wasn't removed from her birth mother for 5 years, and then spent another 1 and a half in foster care, before "coming home," I understand your concerns here. When Lucy turned 13, we gave her permission to write her birth mother. They exchanged a couple of letters, and a year later, face-timed one another.

It helped Lucy so much! The face that haunted her, the woman she loved, and hated at the same time, was now, no longer a memory of pain she believed she would spend the rest of her life bearing. She was just -her birth mom.

Her birth mom respects our limits in contact, but Lucy doesn't even remember to call on her birthday or Christmas, anymore. The interest seems to be gone. We are so glad, we gave her the chance to heal. I truly wish this woman would do the same for your son.

Our daughter came from a home of nightmares. It is hard to forgive -but do they deserve our emotions -I think not. I don't provide her will feeling -only the love of life, I am required by my Father in Heaven. I will not carry her burdens for her.
www.fiddledeedeebooks.wordpress.com

Thank you for the insight. My brother is also adopted, from India, at age 6 months. Our family loved him like crazy, and he seems to be a well-adjusted extrovert at age 40. He is grounded in his outlook on life, serves as a co-minister for his local church, has a loving wife and three beautiful children, sports a 6 digit salary as partner in a large accounting firm, owns an approx 7000 square ft home, travels internationally at least twice a month, and has been featured in at least three magazines for outstanding young professional achievement. Yet there almost seems to be something missing in his life. As a little guy he was so affectionate towards us all, but as his older sister, I especially claimed him as my OWN buddy. I was 10 years older than he was, and I believed he was my very own baby doll. Over the years, he's loved me back - saved all his allowance the year he turned 12 to buy me a one-of-a-kind kitchen knife, etc. But when he turned 17, something in him seemed to stiffen - he talked easily and "happily," but the deep talk, the comfort with love seemed to vanish, and he began to bury himself, to hide in work and constant activity. To this day, he seems to keep himself at an emotional distance even from his wife and children.
Your comment about birthdays being a reminder of another origin hit me. Yes, as much as we try to love an adopted child, there is no way to erase that other existence, that subconscious hunger for genetic belonging. Yet many people have challenges in their lives, and this is only one kind. I know it is possible to live and be happy despite that nagging awareness. My husband was also adopted, and never chose to seek his birth mother either. He seems happy and at peace. But it takes more emotional effort and determination to do that if there is a knowledge that must be faced. Thank you for your insight, your perspective on your son's struggles, and a renewed reminder to be aware that both my brother and even my husband may need some extra understanding and thoughtfulness.